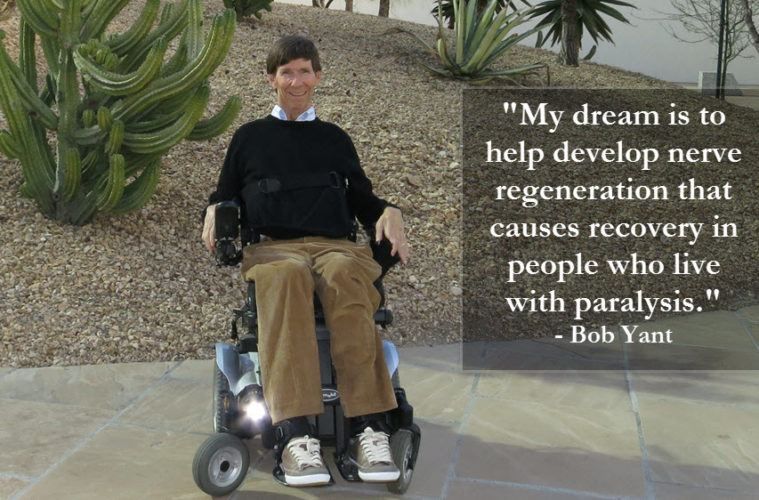 If you follow spinal cord injury research, you will sooner or later come across the name Bob Yant. If you don’t yet know him, let me introduce you to the ultimate cure warrior.

Bob’s been on the front lines of the SCI cure battle for almost 40 years, and yes, if he had a beard it would be gray. Many of Bob’s activities have been in fundraising and nonprofit stewardship, but he’s now an entrepreneur with a biotech startup fueled by passion and faith in the scientific process, and by venture capital. A company he co-founded, Axonis Therapeutics, Inc., just raised some money in hopes of launching a drug to address chronic SCI. Here’s their very first press release.

Bob is originally from northern California, graduated UC Berkeley and then moved to Southern California. He was injured in 1981; an errant surf-dive in shallow water near his home in Newport Beach resulted in a C5 level injury. He’s a lifelong San Francisco Giants fan.

Sam Maddox: So, Bob, 1981. Reagan was president, baseball went on strike that summer, and your spinal cord went on the fritz. It didn’t take you long before you went deep to see what was being done to address SCI. What was the story then?

Bob Yant: Yes, I had always been interested in science and its potential to fascinate us, and to change our lives. I think it was about half way through my rehab I started asking what was going on in research. Not much, I discovered, although Jerrold Petrofsky was making news with an implanted FES [functional electrical stimulation] system to facilitate (quote unquote) "walking in paraplegics".

Maddox: I take it you didn’t volunteer to go to Ohio to get wired up. How did you stay motivated?

Yant: Nope. My sense then, as now, is that a biological cure is the optimal approach. I kept asking. My parents sent me an article about Michela Alioto, who at 13 years old injured her spinal cord in a skiing mishap. Her family was prominent in San Francisco politics [her grandfather Joseph was a former mayor]. Michela’s parents used their connections to raise funds for research, and formed an organization called the Paralysis Project of America (PPA). I reached out to them and wanted to help, and set a goal to raise $25,000 for them. At the time I thought that that amount would more or less satisfy my commitment to the SCI cause. Little did I know it then but here we are 39 years later and I’ve raised closer to $18 million for SCI research.

Maddox:  Wow. Then what?

Yant:  The Aliotos invited me to join their organization as a board member. I was honored and immediately said yes. From that point, I began to really focus on what research was going on and what we could do to fund more of it. In 1983, three national SCI groups merged, including PPA, a group in Texas started by Kent Waldrep (who had a football-related spinal cord injury) and one in New Jersey started by the family of Henry Stifel (who had been injured in a car wreck). The alliance called themselves the American Paralysis Association (APA). I stayed on as a board member and we grew to become the preeminent SCI funding charity in the US for many years. Of course, later APA became the Christopher & Dana Reeve Foundation.

Maddox:  So the board was closely involved in the science APA funded?

Yant:  Yes, as an organization we were exclusively committed to funding a cure for spinal cord injury. Our science advisory council reviewed and scored all proposals and the board made the final funding decisions. We became more and more scientifically rigorous. Importantly for me, I was able to meet many of the top scientists on the advisory panel, and some of those we funded. I came to understand the value of peer review, as I continued to deepen my knowledge of both basic and clinical-related neuroscience research.

Maddox:  SCI research was long burdened by the dogma that central nerves don’t recover. What changed?

Yant:  By the end of the 1980s scientists had made some discoveries that cracked open the dogma. Albert Aguayo showed that a central nerve axon could grow in the spinal cord if it could extend into a peripheral nerve implant. That changed everything: It was the environment of the injury, not the nerve itself, that prevented growth. Then Martin Schwab and others discovered what it was about that molecular environment that inhibited growth, and they found ways to neutralize these inhibitors. There was real excitement in the field as it was becoming clear that the cord had the potential for meaningful recovery.

Maddox:  We will get to your company and its upside. First, if you could take the way-back machine to the 1980s or 90s, are there any projects or lines of thinking you would have really pushed for?

Yant:  Back in 1985 this is the last thing I might have said, but more funding was needed for basic science. We had a proposal come in to APA to study developmental neuroscience – to better understand how the nervous system is formed at birth. I sort of rolled my eyes at this as being the opposite direction of developing injury models to address human SCI. But developmental research has been enormously important, to see how the system formed and to try to recapitulate those processes. Now, with the revolution in genetics, we have powerful new tools that may help us turn on growth and regeneration.

Maddox:  And of course this genetics boom is the reason you got into the biotech business. Let’s set that story up.

Yant:  Sure. One of the times Christopher Reeve was on the Larry King show, this would have been in the late 90s or so, he talked about his horse jumping accident. He never blamed the horse. Joan Irvine Smith, a wealthy heiress and philanthropist here in Orange County, saw the show, and being a horsewoman herself, and wanting to set up a research center, sent a letter to Reeve’s home in New York. They were getting a ton of mail and kept it in three piles: the friends and family pile, the general public pile, and the kook pile. Smith’s letter, which included a check for $1 million, went into the kook pile and wasn’t seen for weeks. Finally, Reeve’s people found it and went on to create the Reeve-Irvine Research center, on the campus of UC Irvine. That’s very close to where I live.

Reeve-Irvine recruited Os Steward from the University of Virginia as director. He was known for his research on molecular mechanisms of spinal cord nerve cell regeneration. Once he got to California I met him; he’s a very amiable guy. He asked me what sorts of things Reeve-Irvine ought to be exploring, and every few months we would get together to talk about spinal cord research. This went on for years.

Back then there was a spinal cord research award called the Ameritec Prize, set up by the Hollfelder family here in Orange County; I was the director of the prize from 2001 to 2008. In 2005 we awarded the prize to Zhigang He of Harvard for work he did identifying inhibitory molecules that blocked axon growth. I remember at the time Os said to me, ‘keep and eye on this guy, he’s going to make a difference.’

Maddox:  So just so we keep things in perspective, you are also still on the Board of Directors with Reeve at this time?

Yant:  Yes, but I had begun to have a more independent outlook. There was a lot of work being done with stepping and activity but not much with hand function. That’s because it’s harder. So I asked Os, and ten other prominent SCI researchers: what do we need to do to restore upper extremity function? And they all told me, regenerate the cortical-spinal tract (CST), a key set of spinal cord nerves that start in the brain and control major motor function. The thinking was that if you could regenerate the CST you could do the same with all the other spinal cord tracts.

Os called me one day – I remember vividly it was a Monday, June 22, 2009 – and asked, factiously, ‘are you still interested in CST regeneration.’ Of course I was. He said, ‘well, Zhigang has made it happen.’ Os showed me a microscopic image of stained CST axons crossing the lesion of a spinal cord injury and into the tissue below. For 25 years I’d been looking at these sorts of images and the growing axons always regenerated right up to the edge of the injury, but never beyond. I knew that a breakthrough had occurred, something truly profound. It changed my life.

Maddox:  I am familiar with this very cool work – Zhigang used genetic tools to sort of take the brakes off CST axons, thus repowering their intrinsic ability to regenerate by blocking PTEN, a master regulator of cell growth during development. I’ll quote your website here: “As animals are developing, cell growth is driven by a growth promoting mTOR (mechanistic target of rapamycin) pathway. As animals mature, growth inhibiting genes such as PTEN turn on to block mTOR to prevent cell overgrowth. The unfortunate consequence of growth inhibition in neurons is the loss of ability to regenerate after injury. So, the trick to enable regeneration after injury is to use gene targeting techniques to knock down PTEN, which releases ‘the brakes’ on mTOR growth pathway, and reinstates a remarkable ability to regenerate.”

Maddox:  Meanwhile, you didn’t wait long before you seized the opportunity to take this further.

Yant:  The day Os told me about Zhigang and PTEN, he asked me if I would like to join a phone call with Zhigang the next day. I did. I asked him if Harvard had applied for a patent. Yes, they had. I told Zhigang about my idea for a company.  Zhigang loved the idea and that call led to our eventually getting an exclusive option to license four patents resulting from Zhigang’s breakthrough. I reached out to Corey Goodman, a very successful scientist-entrepreneur and a really brilliant guy, to come aboard; I was thrilled that he grasped the significance of Zhigang’s discovery. Corey’s background and experience have been invaluable to Axonis

Maddox:  OK, fair to say PTEN research is moving along? Per your press release, Axonis is focused on another of Zhigang’s discoveries.

Yant:  Yes, Os’s lab continues to study PTEN and we are committed to the development of the PTEN deletion strategy. The other Zhigang discovery is a protein called KCC2, which in animal studies improved the recovery of stepping function. The idea is that 70 to 90 percent of spinal cord injuries have spared nerve tissue, even in so-called complete injuries. KCC2 has an effect of restoring a more balanced growth mode in surviving nerve cells. Our press release was about getting $4 million in seed funding to conduct pre-clinical studies with the hope KCC2 can move along toward studies in larger animals, and then human use.

Maddox:  I’ve heard you champion PTEN for quite a while. Are you now taking a longer view of research development?

Yant:  Over the years I have learned just how complicated it is to work on the injured spinal cord, how daunting a task it really is. I have a lot of respect for this complexity, and so I have learned to take the long view. I never did race out and embrace what might have seemed the quickest path. And because of that I didn’t burn out, as I have seen many others do. I’m like the tortoise in the story with the hare. Slow and steady. Persistence is 90 percent of the solution. You can’t lose focus. I’m excited by the possibilities for Axonis. We may be on the verge of a couple of therapies that could really make a difference for people with SCI.