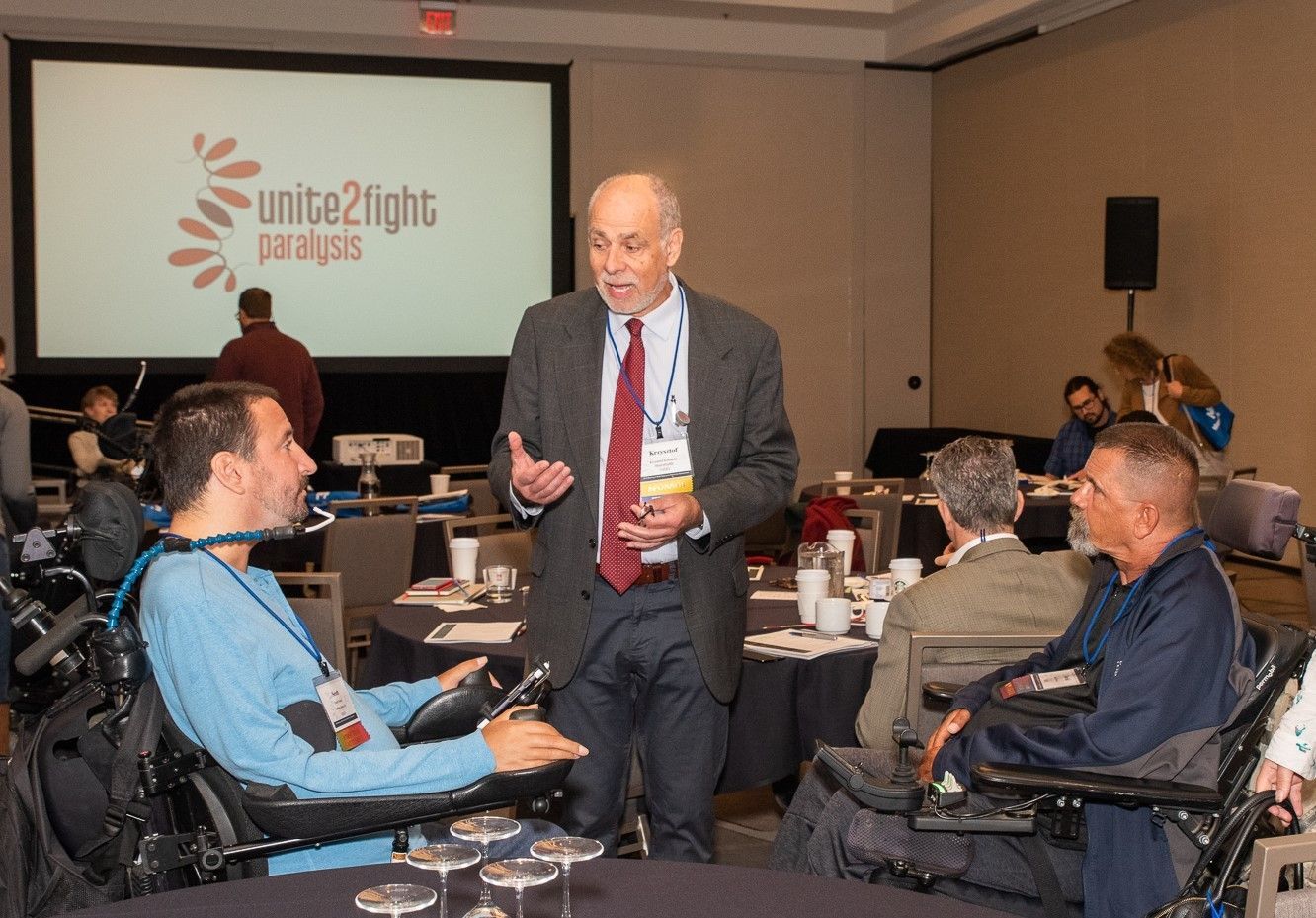 This post is the third in a series with background and context for the 2021 Unite 2 Fight Paralysis Annual Science and Advocacy Symposium. This two-day event breaks down what it will take to repair the injured spinal cord and restore function.

Save the date: this year’s Symposium is October 22 and 23 in Salt Lake City, Utah. You can view the current agenda here, our speaker lineup here, and hotel info here. Then go register online here.

The Symposium is not a TED talk or a lecture series. It’s an interactive partnership of people with a stake in the SCI world, including scientists, clinicians, funding agencies, biotech people, etc. The SCI community, those living with the injury, are a key part of it; you are encouraged to share your story and voice your priorities. Don’t miss this opportunity to engage with the experts during the sessions, during breaks or later in the hotel lounge. Don’t be shy — participants welcome this chance to meet you too, it keeps their endpoints, and motivation, real.

Let’s now consider Regeneration — the functional regrowth of spinal cord nerve fibers (axons). Axons are the long fibers that may travel down the cord, responsible for major muscle activity. Injury causes the axons to shrink back toward the cell body. Nerve cell bodies want to grow their axons after injury, and very much try to. But axons are confronted by an injury site that has become quite toxic and sealed off to growth. And it’s not just the inhibitory environment. The nerve cells don’t seem to have the juice to grow with the vigor they had when the embryonic and developing nervous system was first wired up.

So, the challenges are to unblock the axon pathways and to repower the cells. Downstream, of course, the new axon must eventually hook up with the appropriate connection to restore functional circuits.

In theory, it’s possible: growth machinery can be restarted by recoding developmental genes; barriers can be overcome by using molecular decoys or drugs to remove scar; long axons can be cultivated to extend far across the injury site, perhaps along a scaffold. (As we recently discussed, Michael Lane, from Drexel, has shown the beneficial effect of transplanting a specific stem cell subtype in restoring breathing to a paralyzed rat; the new cells wire in but also enrich the poisonous injury milieu. Jacob Koffler, from UCSD, has grown stem cells on 3D printed scaffolds. Both are in the spinal cord regeneration business — not entirely by building new circuits, but by adding support to existing circuits).

The final part—making functional connections between the spinal cord and muscle targets that might be 18 inches away— they’re working on it.

This is very difficult biology and let’s be clear, it’s a long way from human use. What’s clear to scientists is that a single approach probably won’t be the answer; regeneration will almost certainly be in the form of combination therapies along the stages of axon growth.

The theme of regeneration — and collaboration — is woven through the Symposium agenda.
Here are a few examples of how regeneration works:

Collaboration Matchmaking
At the 2020 Symposium U2FP featured a panel called Accelerating Translation with Porcine Models of Spinal Cord Injury: An Invitation to Collaborate. Candace Floyd, a neuroscientist from the University of Utah was joined by University of Toronto scientist Molly Shoichet and University of Texas researcher Nick Jefferies. Shoichet described a new formulation for a scar-busting drug (chondroitinase, or chase) that promotes regeneration much better than other less stable versions of chase. Jefferies talked about his well-developed veterinary model for spinal cord injury; he has used chase to help paralyzed dogs.

Here’s the collaborative payoff: Shoichet and Jefferies, who previously did not know of each other’s work, got together and wrote a grant to try her new chase formula in his paralyzed dogs.

Floyd returns in 2021 for a Friday morning panel (October 22) addressing Strategic Relationships. She will no doubt mention another potential alliance that evolved from last year’s Symposium. Floyd specializes in using larger animals (pigs) to test therapies usually done in mice or rats. Rodent research is valuable but in many ways not relevant to human SCI. Primate research is obviously preferable but harder to do, more expensive, and more exposed to animal rights activism. Pigs, well, they’re sentient beings too. But as long as people still consider them food, they will play a significant role in treatment development.

Floyd’s collaboration, again facilitated by U2FP, involves 2021 Symposium sponsor NervGen. The biotech was formed in 2018 around the idea that a peptide drug (from the Jerry Silver lab at Case Western, Cleveland) promotes spinal cord axon regeneration by blocking a bad molecule called protein tyrosine phosphatase sigma. The peptide is getting close to the clinical trial stage but has not been tested in animals larger than rodents.

So, Dr. Floyd, meet Dr. Marc DePaul, research director at NervGen. They quickly found common ground and started cooking up an idea. A third combinator hypothesis was brought to the table – how about using spinal cord stimulation as an adjunct to the peptide? Floyd and DePaul met neurosurgeons Ann Parr and David Darrow from the University of Minnesota. Parr and Darrow are investigators in the E-STAND trial, a large clinical study testing epidural stimulation. The stim piece fell into place.

The group, also joined by Silver, is currently lining up funding for a multidisciplinary combination chronic SCI study in early 2022: use the peptide drug (NervGen/Silver) to free spinal cord axons from their bonds, add in epidural stimulation (Darrow/Parr) to optimize their growth and plasticity —try it in a clinically relevant large animal model (Floyd).

Other panelists on the Strategic Collaborations panel include Sabhya Rana, a neuroscience post-doc from the University of Florida and Warren Alilain, an Associate Professor at the University of Kentucky’s Spinal Cord and Brain Injury Research Center. (Alilain can be expected to weigh in on any discussion of chase; he’s studied it for years. He was lead author with Jerry Silver in a 2011 paper in Nature showing that chase induced very cool recovery of breathing in a chronic model of SCI.)

Rana and Alilain are on the program to discuss the International Online Spinal Cord Injury Research Seminars (IOSCIRS), created in 2020 to keep scientists in touch with online research seminars despite pandemic related travel restrictions. It’s a great idea which has gotten lots of support in the research community, and they want to make sure the SCI community participates in upcoming presentations.

Incubating Innovation
A Saturday panel, Discovery to Market, is about the process of bringing an idea from the lab to the marketplace and clinic. Featured are two companies, Onward, a Symposium sponsor with spinal cord stimulation technology in clinical trials, represented by co-founder scientists Gregoire Courtine and Jocelyn Bloch, and CEO Dave Marver; and Blackrock Neurotech, the Utah firm that makes the implant arrays used for brain to computer control, in the person of Florian Solzbacher, co-founder and chairman.

Also on the Discovery to Market panel are Paul Corson, a tech transfer expert from the University of Utah, and Jim Hamer, Director of the Spinal Cord Injury (SCI) Program at DP Clinical, Inc., a contract research organization (CRO) that specializes in running SCI clinical trials. (Hamer is also on the Board of Directors for U2FP; DP Clinical is a sponsor for the 2021 Symposium).

Let’s focus on panelist Arushi Raina, Director of Commercialization for the Praxis Spinal Cord Institute. She will describe an incubator program that nurtures promising young companies with ideas for SCI therapies. Two companies Praxis championed in recent months have regeneration-related strategies. Spiderwort (represented at the 2021 Symposium by founder Andrew Pelling) hopes to commercialize a plant-based scaffold (covered here). The idea is that an axon stands a much better chance of long-range growth and connection if it can follow along a smooth pathway.

Praxis pointed out the importance of tackling spasticity and pain. I had initially focused on the KCC2 enhancer to cure paralysis, but now I have learned that helping with pain and spasticity is as important as motor function.

The support from Praxis has been truly far-reaching. Praxis supported our fundraising efforts and is helping to build out our regulatory, clinical and IP strategies. We are incredibly grateful for this mentorship and coaching

Next time: the 2021 Symposium looks at the science of sexual function, the keto diet and SCI, and the facts about exercise.