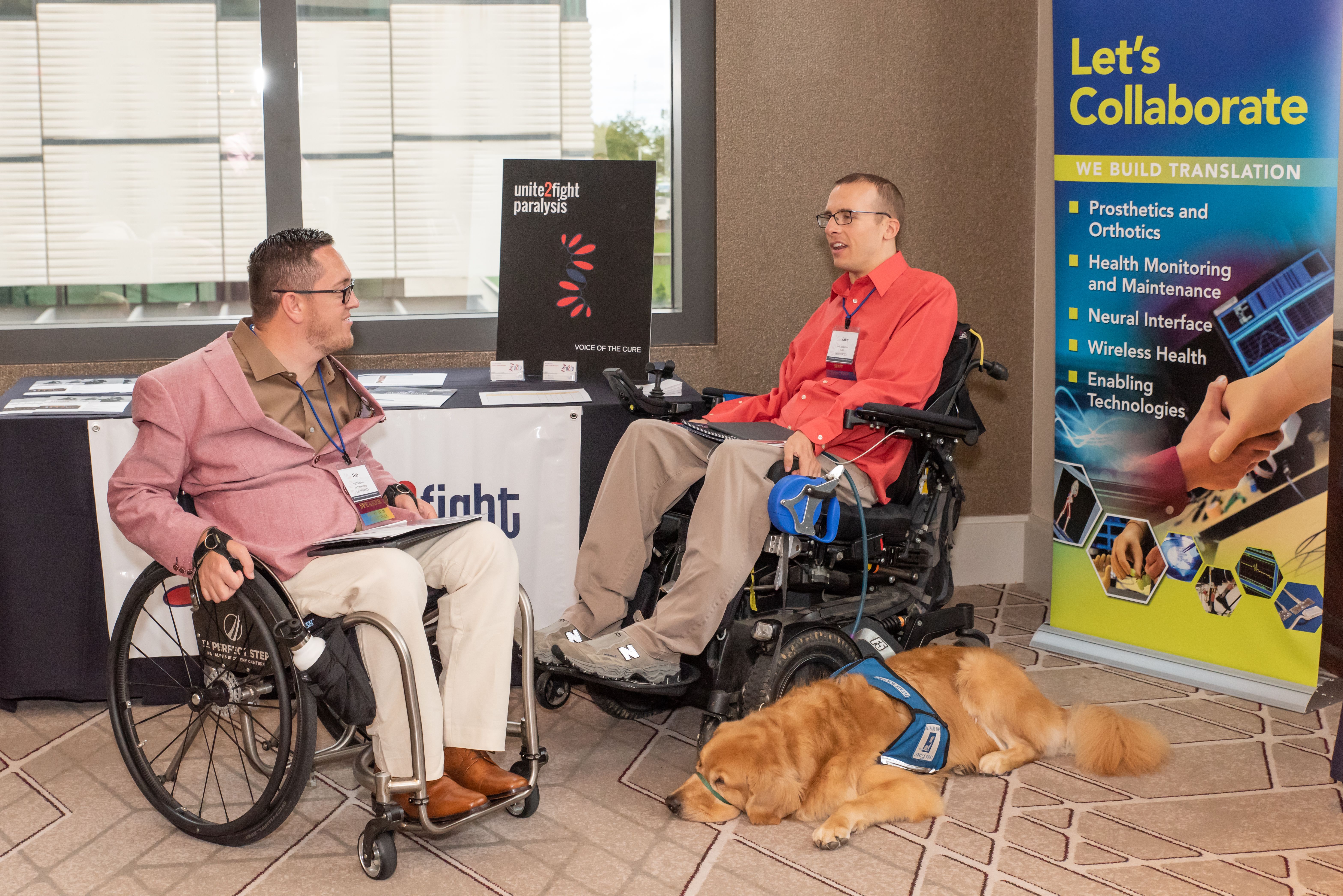 The 2019 Working 2 Walk (W2W) Symposium in Cleveland, Ohio, was the first W2W Symposium I have attended. It won’t be my last.

I was injured in the late summer of 2005 during a pool-party gathering with friends and fellow teammates after a high school football practice. I dove headfirst into the shallow end, hit the bottom, and broke my fourth, fifth, and sixth cervical vertebrae, damaging my spinal cord. I’m so lucky my friends were there to pull me out of the pool. That was 14 years ago.

Some days it seems like two weeks ago. Others, 30 years ago. But while I was still in recovery and completing my physical therapy, the inaugural Working 2 Walk had just taken place in Washington D.C. in the fall of 2006. I can only imagine, based on what I experienced and learned this year in Cleveland, what leaps and bounds in scientific collaborations and increased committed efforts to find a functional cure to SCI have taken place due to those 12 previous Symposiums across the continent.

When I first entered the large ballroom of the Cleveland Marriott on the first day of the Symposium, minutes before the opening remarks and welcome from Matthew Rodreick of U2FP and John Chae of MetroHealth, I found a seat at one of the tables near the back of the room. Scoping out the layout of the ballroom, speaker’s podium, and visual aid screens, the first thing that struck me was just how many SCI community members were there in that room.

People with spinal cord injuries, their parents and family members, their husbands and wives. All of these people whose lives had been flipped upside down by a single moment were there chatting, sipping their coffee, nibbling on scones, and eager for the busy day to commence.

You may say to me, “Well, obviously there are going to be a lot of people who use wheelchairs and members of the SCI community at a symposium geared towards curing spinal cord injury.” Unfortunately, that is not often the case. Most symposiums do not see many attendees from the SCI community and definitely not from the lay population. This is a part of why W2W is so unique. But nevertheless, seeing all of those people, in one room, excited to hear about and discuss the previous year’s scientific breakthroughs, discoveries, and setbacks, filled me with a sense of hope that I have not felt since the first few days after my accident, when I still thought I may be able to have a full and complete recovery.

The hope that struck me on that early Cleveland morning was palpable in a way much different than when you read headlines in the news touting the latest scientific discovery pertaining to SCI. This "news-hope" hits you quick, and fades away even quicker.

But the hope at W2W is different in the sense that, even though many of these procedures are in their very initial stages and won’t be available to the public for awhile, the important part is that the scientists who are conducting these studies and procedures are in this very room together, sharing their findings and thoughts with you and other scientists who are studying other aspects of SCI.

All of these scientists, clinicians, and researchers are having conversations with each other, sharing ideas and insights on how to move the needle forward. And you can talk to them too! Ask them questions, tell them your thoughts and feelings, tell them why they need to press on with a difficult project, encourage them to make the next leaps in their discoveries.

But hope and inspiration can only take you so far in life. At some point, the rubber has to meet the road if you want to make any traction and move forward, which brought me to my next major realization.

I had no idea how much must take place for an idea in a scientist’s brain to make its way through the research and regulatory pipeline become and become a fully functioning procedure that I will be able to benefit from.

About midway through the first day, the symposium moved to a pair of speakers who discussed the hoops and hurdles that needed to be maneuvered to get things approved by the FDA and funded with Medicare and Medicaid. At the time of these speeches, I fully came to realize how much I did not understand about how hard it is to bring about a functional cure to SCI.

At that moment, I felt confused and overwhelmed by all of the challenges, decisions, and risks/benefits that must be weighed to bring any type of medical procedure from point A to Z. I realized that I had never even thought about that process, and that I did not truly understand it.

However, when I look back on it now, even though I was awash in the deep end of new information, I can grasp that it is important information that I need to be aware of and that those hoops and hurdles must be maneuvered in order to bring about a functional cure to SCI.

Lastly, one of the most enduring things I took away from the W2W symposium was the memories and feelings I formed when I was able to talk and connect with other wheelchair users from around the country. During the breaks between speeches, I tried to find someone new wandering the halls, that I hadn’t talked to before. I would ask them about their story, and what brought them to W2W. It was marvelous to be able to connect with so many people going through ostensibly the exact same thing as me. It was amazing to feel a sense of connectivity to so many different people, and to know that we were all here in this room to bring about the same conclusion, a functional cure to SCI.

I have stayed in contact with many people I met in Cleveland, and I am so excited to continue my work as manager of the Cure Advocacy Network to strengthen those connections and to expedite the day we find a cure to SCI.

Next year, the Working 2 Walk symposium is in Salt Lake City, and I can’t wait to see you there!