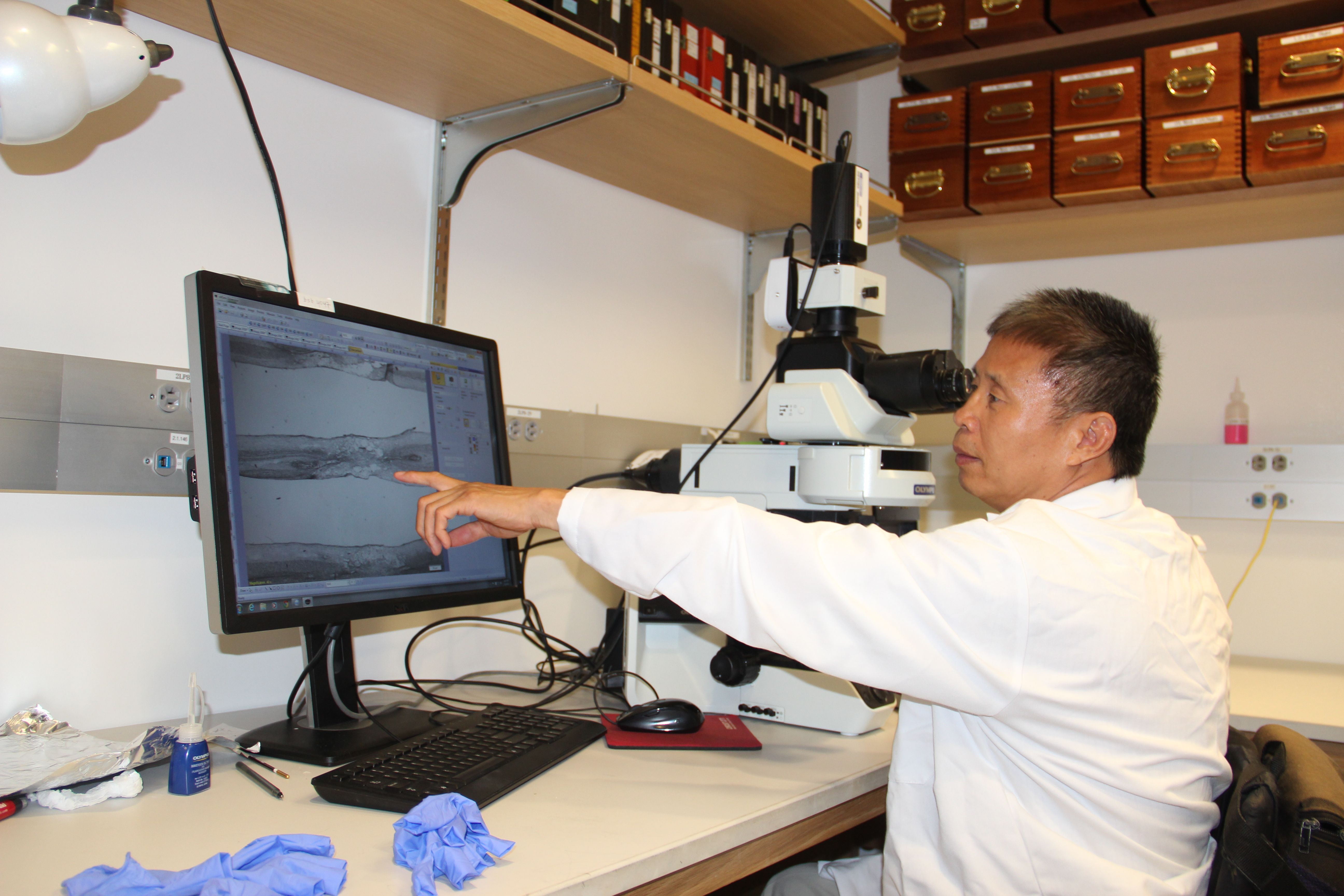 Paul Lu, a scientist at the Center for Neural Repair at the University of California, San Diego, has recently joined the U2FP Scientific Advisory Board. We welcome his expertise and thank him for his commitment to the field.

Lu’s work focuses on repair of chronic spinal cord injury. His motivation is in many ways personal: Lu’s own injury drives him toward finding cures.

“My goal is to solve the mysteries of spinal cord repair, for all of medicine, and also for myself,” says Lu. “It’s an exciting time in my field of work, and I have always believed that science will restore a meaningful degree of my lost function.”

Lu didn’t pick neuroscience; it sort of picked him. He is an expert in SCI regeneration, but he started out studying plants. He came to the U.S. in 1990 to study biology at the University of California, Davis (UC Davis). “I had been a teacher in my native China but things were opening up for young people back then – closed doors were suddenly opened, and my country sent me to the U.S.”

After getting his PhD in molecular plant biology at UC Davis, Lu stayed there for a post-doctoral fellowship. His career was going according to plan until he was in a car accident in 1996. Lu was spinal cord injured; he was married and had a son, and no health benefits.

Lu says he wanted to stay in academia but was discouraged that UC Davis did not offer him a full time program. “I was about ready to give up. I had my ticket and was all set to go back to China; there, my brothers would have taken care of me.”

Days before Lu’s plane reservation back home, he visited the Resource for Independent Living Center in Sacramento, 20 minutes up the road. “I told them, ‘I need a job, any job.’ The director said, ‘Can you type?’ Of course, I told her, I’m a PhD. She hired me for a social work job, which I learned quickly to do, and for a few months I helped other people with disabilities find work and housing. Being able to work and knowing I could work was really important in regaining my confidence.”

Social work as a career wasn’t the right fit. Lu was a trained scientist and wanted to re-enter the field. Naturally, he began to explore the science of repairing the spinal cord. He studied the literature. He recalls learning about the Miami Project, the Fred Gage lab at the Salk Institute in San Diego, and the Mark Tuszynski lab, also in San Diego.

He wrote to each of the labs, told them he had the PhD in biology and that he would like to be involved somehow in SCI research. “I didn’t hear from them. But one day, Mark Tuszynski was in Davis to perform some animal surgeries. He called me, asked if I had time to meet. I told him my story; he said, ‘You deserve a chance to work.’ So he offered me a post-doc position at UCSD.”

Tuszynski recalls this first contact: “I remember an email from a man at UC Davis who had his PhD in plant molecular biology. He said he had recently sustained a spinal cord injury, and would like to volunteer to be a research subject or to do research. Since I visited Davis frequently, and this was a fellow scientist who was in need, I owed him the respect and decency to at least meet with him. The man I met, Paul Lu, was startlingly intelligent, dignified, and accomplished. I did not really have sufficient funding at that time to hire him, but I did anyway, taking a chance that both he and the funding would work out. It was one of the best decisions I have made. Paul is an exceptional individual and human being, before one takes his injury into account. After taking his injury into account, he is even more impressive.”

Lu already had expertise in cell biology. He quickly got up to speed on the basic biology of spinal cord trauma; his first publication showed how to clone the important axon growth factor BDNF, leading to an experimental gene therapy to promote motor axonal regeneration after spinal cord injury.

Lu hadn’t been in San Diego long before the Tuszynski lab published a paper that generated high publicity (even in China), and high hopes. Tuszynski used a genetically modified fibroblast, a skin cell, to express a growth factor called NT-3. When grafted into the spinal cord, there was significant functional recovery. This was exciting for Lu, and for the field. “At the time,” says Lu, “I thought, wow, we were really close to the solution.”

In 2003, Lu co-authored a study grafting NT-3 in a chronic spinal cord injury model. There was significant growth of corticospinal axons up to 15 mm beyond the lesion site and modest improvement in locomotor scores. Then the lab combined NT-3 with a molecule called cAMP, which activates nerve cell signaling. This time, axons regenerated not only into the cell graft that was expressing NT-3, but also beyond the injury site. Lu and his colleagues believed this sort of bridging was a major advance toward spinal cord repair. Nice results, but growth factors were still not ready to be a human treatment.

Getting on the Stem Cell Track

Meanwhile, Lu had become interested in the potential of stem cells. “Cell lines were becoming available to study. I asked Mark if we could pursue this area. He wasn’t convinced. He advised against it but told me, ‘You can try.’” So starting in 2002, Lu began to graft embryonic stem cells in the spinal cord. Once transplanted, however, the cells did not stay in the lesion area. They died. “My challenge was, how do I get the stem cells to survive in the spinal cord injury site?”

Lu came up with a cocktail approach, using a combination of stem cell transplantation and a unique blend of ten growth factors imbedded in a sticky fibrin paste. The work was detailed in a widely cited 2012 paper in the journal Cell.

Lu noted that this regeneration can occur even in a chronic injury, “even after substantial delays from the original injury, even after three months in rodent models.” The study was widely reported in the news media. Tuszynski described these results as “astonishing. ... Using this method, after six weeks, the number of axons emerging from the injury site exceeded by 200-fold what had ever been seen before. The axons also grew ten times the length of axons in any previous study and, importantly, the regeneration of these axons resulted in significant functional improvement.”

The procedure created new nerve circuitry that could be detected electronically. Again, exciting. But ready for the clinic? Not quite so: recovered function in the animals was indeed meaningful but did not restore walking ability, or even the ability to bear weight.

But even if the stem cell approach is not ready for clinical therapies, “it would not be crazy to think they will be useful for humans,” said Tuszynski.

Lu’s recent work (links here and here) continues to demonstrate unprecedented growth of spinal cord nerves up and down the cords of injured animal models treated with neural stem cells. It is clear that the transplanted cells provide connectivity, though functional recovery has not been as robust as it needs to be. This, says Lu, is likely due to random connectivity that is not efficient.

“It’s a time of great hope,” Lu says. “We have new tools and new approaches. There is a lot of work still to do. But the door is open to new developments.”

Chronic Injury, Why Not?

What’s next? Lu of course has his eye on chronic spinal cord injury repair. Using genetic techniques to stimulate the intrinsic growth of a nerve cell, plus the addition of molecules to condition the environment to encourage growth, and perhaps the addition of other molecules to direct nerves toward the proper targets, Lu is confident he can bridge the area of damage, including the scar tissue, and make new, and efficient functional connections.

Lu is also very encouraged about new types of engineered cells, induced pluripotent stem cells (iPSC). These cells behave very much like embryonic stem cells but because they are derived from adult cells, there is no ethical controversy; these cells can be taken from a patient, rewound to a more primitive state, and transplanted back to the same patient without immune-rejection. One drawback to iPSC cells is that after transplantation, there is some risk of tumor formation. Lu is experimenting with a drug used in cancer research to stop unwanted cell division.

Lu reports that he has an important new paper coming soon in a major journal that will likely attract a lot of attention.

“Our hopes are high,” said Lu. “We will continue to fit the pieces together, with the goal of moving a therapy to humans.”