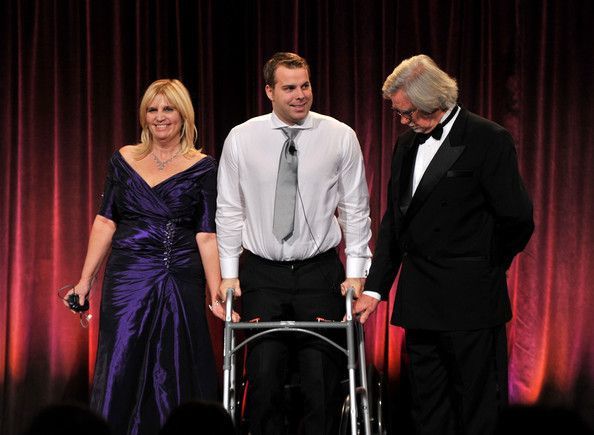 Could there finally be a bit of a bandwagon effect happening in spinal cord stimulation? There are clinical trials aplenty, including implanted stimulators and the ones that work on the skin surface, without surgery. There are now companies testing spinal cord stimulators with an eye on the market, trials with kids are happening, and there are SCI clinicians in the real world using stim devices that are commercially available, albeit not designed for paralysis.

It’s been 11 years since Rob Summers got his epidural stimulator implant, the one that caused a stir once the result was published: here was a young dude who was fully paralyzed but got voluntary movement back with the stim turned on. And there was a lasting effect too – the process of waking up spinal cord nerves apparently rewires some of them. (Pictured above is, from left, Susan Harkema, Rob Summers and Reggie Edgerton back in November 2011)

Spinal cord stim is nobody’s idea of a cure. But the evidence consistently shows recovery, sometimes pretty subtle, but meaningful. It’s the closest thing to success that the SCI research field has seen. But like a lot of things in science, medicine and the commercial and regulatory politics therein, it’s been hurry up and wait. Maybe not too much longer.

Commercial trials: GTX
The G in GTX stands for Gregoire, as in Courtine, a familiar name in the stim world with a long list of animal studies and a handful of high-profile human trials. Courtine’s splashiest results hit the news two years ago in the elite journal Nature: “Targeted neurotechnology restores walking in humans with spinal cord injury.”

“. . . we delivered trains of spatially selective stimulation to the lumbosacral spinal cord with timing that coincided with the intended movement. Within one week, this spatiotemporal stimulation had re-established adaptive control of paralyzed muscles during overground walking. Locomotor performance improved during rehabilitation. After a few months, participants regained voluntary control over previously paralyzed muscles without stimulation . . .”

They call the trial STIMO, and per clinicaltrials.gov, the GTX team is still looking for incomplete SCI patients to enroll. You need to set aside a lot of time – up to a year, in Switzerland or Netherlands. You get a ton of training, an implant, more training and rehab.

There’s also STIMO-2 on the way, a sub-acute SCI trial that would apply transcutaneous stim to those within 6 months of injury, T11 and above; they are hoping to improve motor function in the legs. Not yet recruiting; here is trial info.

At U2FP’s Working 2 Walk (W2W) Symposium last month (you can see the whole thing on our YouTube channel next month), Candace Terfertiller, a PhD therapist and Executive Director of Research and Evaluation for Craig Hospital, described GTX’s big upcoming transcutaneous stim trial, Up-Lift. The trial will enroll dozens of participants at 15 centers in Europe and the U.S. (on hold due to Covid-19). The company calls this a pivotal trial. That means it’s a big bet: If it is safe and effective as expected, the pathway toward approval and commercialization is wide open.

Said Terfetiller, the GTX neurostimulation system “immediately enables stepping,” even in people with complete leg paralysis. The stim also wakes up activity-dependent plasticity, she said, leading to neuro-recovery – meaning that the beneficial effects remain, even in the absence of stimulation.

Commercial Trials: SpineX
SpineX is a Los Angeles-based biotech started by UCLA scientist Reggie Edgerton, whose 50+-year career props up all other SCI stim studies. Small world department: GTX’s stim device came from NRT (NeuroRecovery Technology), of which Edgerton was a co-founder, and which GTX bought out last year; Courtine did his post-doc studies under Edgerton in LA. Susan Harkema, who we’ll get to in a minute, led the first implant study with Summers; she also got her start at the Edgerton lab.

Indeed, SpineX has several irons in the stim fire, using a skin surface device they call TESCoN. The pandemic has delayed enrollment, but they hope to get going again with a bladder related trial, led by University of Southern California urologist Evgeniy Kreydin, a co-founder of SpineX.

A study reported last February demonstrated that TESCoN could reduce detrusor (bladder muscle) overactivity, increase bladder capacity and reduce episodes of incontinence in participants with SCI, stroke and multiple sclerosis. In the new trial, half the participants will receive two hour-long sessions of stim per week over 12 weeks, via electrodes placed on the back. The other half will receive a placebo, or sham stimulation, over the course of the trial. Details here.

A new trial is now recruiting for upper extremity function: this one isn’t officially listed yet but Parad Gad, CEO of SpineX, says they are looking for 28 participants with chronic upper lesion SCI to study gripping recovery. Interested? Contact Dr. Gad: parag@spinex.co.

Funding of $500,000 comes from the Minnesota-based Jack Jablonski Foundation. Jablonski presented at W2W last month, noting that it’s time to “get a win” in SCI research and neuromod is the closest we have. “If it works, it works,” he said.

Respiratory recovery: SpineX published a paper a few weeks ago noting breathing improvement in a single patient with high quadriplegia. Said Gad: “We observed a 35 percent improvement not only acutely but also sustained without the TESCoN therapy across the two weeks and the one week of follow-up.” Here is a video from the company that accompanies the paper.

More Mod
Susan Harkema, from the University of Louisville and Fraser Rehab, has overseen numerous epidural implants in patients with SCI (here’s one called “Task-specific Epidural Stimulation Study”). Harkema’s group hopes to understand the role of e-stim in the recovery of autonomic function, voluntary movement, and standing in 36 participants with severe SCI.

One more from Harkema, who notes that the bladder hasn’t been specifically targeted with epidural stimulation. This trial sets out to implant 6 patients and then to map the best configurations for better bladder recovery. More here.

More from Louisville
The Louisville/Fraser neuromod squad also has an eye on noninvasive stim. Scientist Alexander Ovechkin is the lead for a trial called “Transformation of Paralysis to Stepping,” detail here. They need 15 participants willing to stick around over a five-year study.  The goal is to develop noninvasive strategies to facilitate full weight bearing during ambulation. They will also see if the drug buspirone helps.

Louisville Pediatric
Andrea Behrman is running three trials at the University of Louisville with paralyzed kids with SCI. One will enroll 19 participants ages 4 to 12 to measure voluntary independent stepping, detail here. Berhman is using a commercially available non-invasive stim product, Biostim-5, which has also been used in stroke stimulation trials.

Other Stim Trials
In Minneapolis, the Epidural Stimulation After Neurologic Damage (E-STAND) trial continues, led by neurosurgeon David Darrow. This is an epidural implant study, similar to what is done in Louisville but unique in its approach. First, it’s without any specific protocol for training or rehab. Second, patients come in, get the implant device, and go home with a phone-app that allows them to fiddle with preset stimulation settings. Third, the lab gathers all sorts of real-world data, remotely. More here.

Neurokinex, in the UK, is enrolling 12 participants (by invitation) to study non-invasive stim combined with activity based therapies. Detail here.

The McGuire VA Medical Center in Richmond, VA is looking soon to implant five paralyzed veterans with epidural stim units, with lots of training and robotic assistance. Not yet recruiting. More here.

The University of Washington in Seattle is recruiting 6 for a study called “Comparison of Transcutaneous and Epidural Spinal Stimulation for Improving Function.” See here.

In Canada, a trial is almost ready to recruit subjects to either Calgary or Vancouver to study the effect of transcutaneous spinal cord stimulation on autonomic function. One of their hypotheses: “spinal cord stimulation will mitigate the severity and frequency of orthostatic hypotension/autonomic dysfunction and improve bladder, bowel, and sexual function.” Detail here.

In Chicago, at the Shirley Ryan Ability Lab, non-invasive stim will be combined with intermittent hypoxia and gait training in 36 participants. Not yet recruiting. Trial information here.

Another study at UCLA: Neurosurgeon Daniel Lu is looking to improve arm function in 12 participants with SCI above C5, using epidural stimulation in combination with a drug, buspirone. Detail here.

Simulation Now, In the Clinic
A word from the clinical realm: Becca Martin is a therapist at Kennedy Krieger Rehab in Baltimore. She reported at W2W 2019 that she’s helping her patients with paralysis recover function using an off the shelf transcutaneous stim device that is easy to come by. Here’s her take on this:

“Transcutaneous spinal cord stimulation holds a lot of promise to amplify recovery, with very little risk. There is a lot we still don’t understand, including the most efficacious waveform and optimal dose. Our work (soon to be published in Spinal Cord Series and Cases) indicates that a clinically available biphasic waveform was effective at amplifying response to traditional walking-based interventions. These units are available now and already in a lot of clinics. This is significant because it means more people can have access to the intervention, and the more people who get the intervention, the more we understand it. Widespread use will help us to better understand issues related to waveform and dose, but also characteristics of responders. This information helps move us toward more target, personalized interventions yielding better, faster results.”

There are many more clinical experiments going on with spinal cord stim. The Kessler Institute in New Jersey is gearing up for a major program, the Miami Project has a group working with stim, as does Houston Methodist Hospital, the Bronx VA and New York-Presbyterian/Columbia University.

What Jack said: If it works, it works. We’ll know soon.