Headline Patrol: 'Doctors might have figured out how to cure spinal cord injuries' 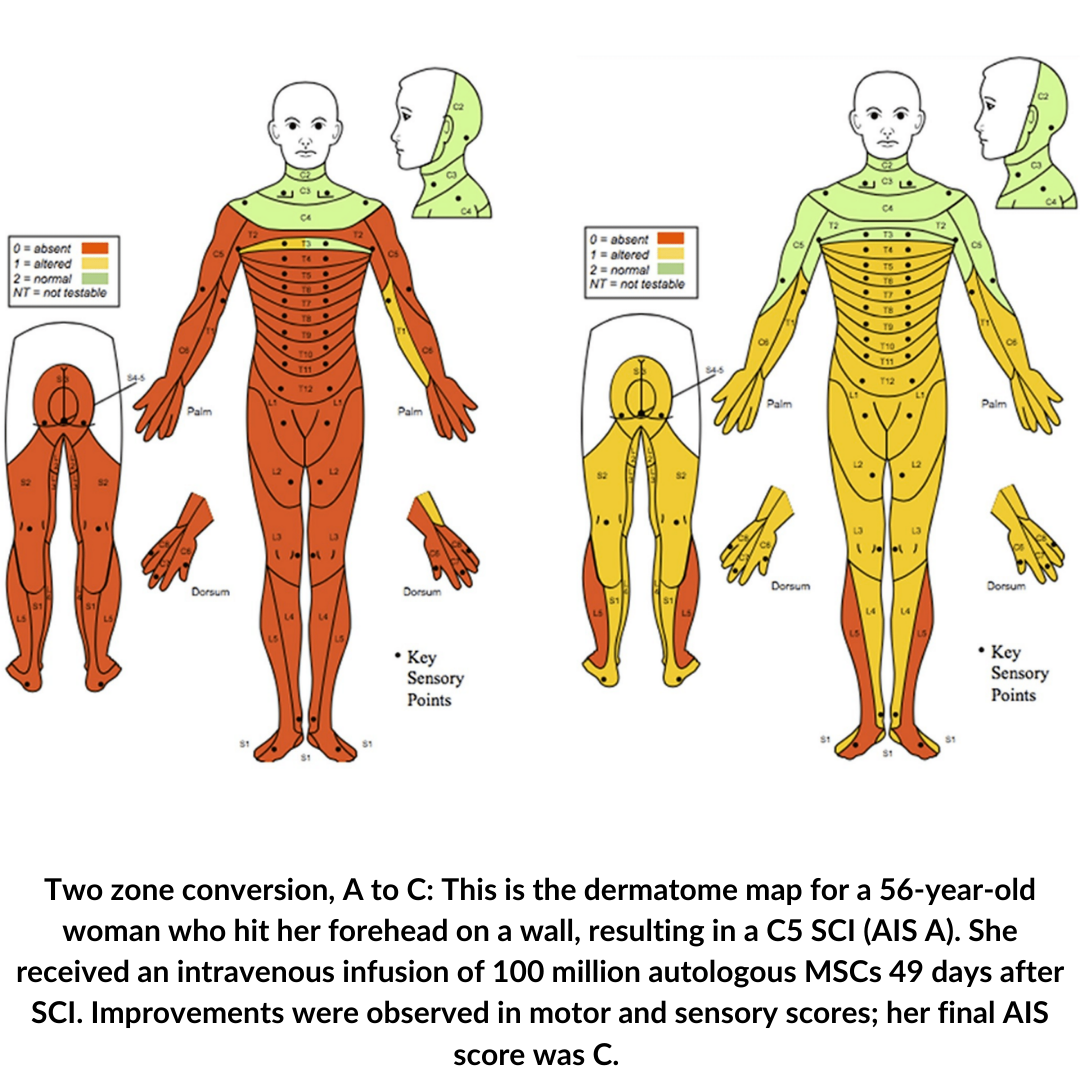 Quite the cringe-inducing title, no?

This is a real headline from a tech/gadget content farm called BGR, for Boy Genius Reports. Not my mainstream but hey, made me look.

Major points to know: this sub-acute clinical study is mainly based on Japanese science at Sapporo Medical University. It isn’t new, it’s at least three years old, but the publication of its results just came out: 13 patients with cervical injuries C2 to C5 and aged 21 to 66 were intravenously infused with their own bone-marrow derived stem cells about 50 days post-spinal cord injury. In 12 cases, motor function improvement was reported by the researchers as “significant.” No tumors, no reported adverse events.

Here is the full paper, “Intravenous infusion of auto serum-expanded autologous mesenchymal stem cells in spinal cord injury patients: 13 case series.” It’s worth a read to see detail for each patient enrolled, including dermatome mapping of function before and after the cell therapy.
Highlights:

So, something beneficial seems to be happening. It’s always a fair question to ask, would patients have gotten better spontaneously, with no treatment? Maybe, but changes seen here came beyond seven weeks of injury, a point at which little recovery is expected to happen on its own.

The research team recognizes the limits of the study. From the paper:

We would emphasize that this case series describes an early study on a small number of patients. In addition to being unblinded and uncontrolled, this study has a number of limitations. We cannot rule out observer bias nor a contribution of surgical intervention to recovery in cases where this intervention occurred, or spontaneous recovery.

Made in Japan
This trial is based on a stem cell line called Stemirac. The team at Sapporo, led by Osamu Honmou and Masanori Sasaki, has been studying this type of autologous mesenchymal stem cell for many years and have consistently reported success in animal models, and more lately in humans with stroke.

Two members of the study team are from Yale, Stephen Waxman and Jeffrey Kocsis, both senior scientists with decades of work in the SCI world. Kocsis has been part of the Sapporo studies for 20 years. For the record, Nipro Corp., the company that makes Stemirac, pays Yale a fee to support Kocsis’s post-docs and preclinical studies in animal SCI models.

I asked Kocsis about the new paper and the stem cell potential.

“We are moving along carefully and cautiously and are trying to minimize ‘hype.’ The approach is quite interesting, but obviously more work is needed and ongoing. We are in the midst of organizing a blinded clinical trial here in the US. Progress has been slowed a bit because of the pandemic, but we have a good clinical group that are working hard to get the study launched.” That trial could take place over the next year, he said.

What Cells Are These?
The Sapporo group uses an adult stem cell labeled as a mesenchymal stem cell (MSC) or stromal cell. MSC is an overly broad term but generally, these are cells derived from bone marrow, adipose (fat) tissue, muscle, umbilical cord, placenta, fetal tissue, and amniotic fluid. MSCs cannot differentiate into nerve cells but can become fat cells, bone or cartilage.

Because they are not embryonic and don’t have a history of forming tumors, MSCs are super common in stem cell therapy development. There are now clinical trials going on by the hundreds, with hopes of treating diabetes, arthritis, autism, lupus, Parkinson’s disease, stroke and many more indications, even COVID, and of course, spinal cord injury.

The MSCs that comprise Stemirac are cultured and expanded from each patient’s bone marrow and blood. The process takes about 31 days to prepare a large enough volume for injection, about 100 million cells, which is delivered by an intravenous drip that takes about half an hour.

Once injected, where do the stem cells wind up? Mostly in the lungs and spleen. The Sapporo group reported to Japanese regulators that only about 5 percent of the cells (in an animal model) migrate to the site of spinal cord injury.

Mechanism: How Do the Cells Work?
So, what are the stem cells doing once they enter the bloodstream? Recovery in just one day would seem to rule out the possibility of new cells replacing damaged neurons or rewiring the system. The researchers actually don’t know what is happening but speculate that the new cells secrete nerve growth factors, especially BDNF (brain-derived neurotrophic factor), which is known to reduce swelling, reduce blood leakage, and normalize the chaotic nervous system chemistry related to signal transmission.

They think the stem cells might also fire up genes in the brain to trigger further gene expression in the spinal cord, thus provoking functional change. The new cells might have something to do with remyelination (re-insulating nerve fibers) or with tamping down immune response that works against recovery.

Did cell replacement spawn regeneration? No case can be made from the human study but the same group from Sapporo reported that mice given their own bone marrow stem cells did appear to induce sprouting, regeneration and remyelination.

Japan’s Fast Track
The stem cell clinical trial from the Sapporo group ignited quite a bit of controversy: is the aggressive approval stance of Japanese regulators good for patients, or for the scientific process?

This study has been hotly discussed in the stem cell world -- not because almost all the trial participants got better. The unpublished data on just 13 patients convinced the Japanese Ministry of Health to approve the procedure for commercial use. The approval was limited (read about it here) but it means that these cells are on the market, in Japan, now.

So, what, that’s a good thing, right? Move research to the clinic, stat!

In context, the Japanese science enterprise has been slammed for going too fast. The journal Nature wrote an article two years ago titled “Japan’s approval of stem-cell treatment for spinal-cord injury concerns scientists,” with a subtitle, “Chief among their worries is insufficient evidence that the therapy works.” It’s worth a read to get the full sense of how abrasive the Stemirac trial has been.

Nature also editorialized that “Japan should put the brakes on stem-cell sales - unproven therapies should not be marketed to patients.”

The main beef: research results were not presented first for peer review, the usual practice, but went straight to regulatory officials at Japan’s Ministry of Health, Labour and Welfare. Moreover, the trial design lacked rigor, e.g., there was no control group (comparing results of patients of similar status who did not get treatment) and it wasn’t blinded (so patients and investigators don’t know if they got cells or placebo).

Here’s a flavor of the comments, from James Guest, Miami Project scientist/neurosurgeon:

“This approval is an unfortunate step away from everything researchers have learned over the past 70 years about how to conduct a valid clinical trial.”

Questions Remain
Will these sorts of cells make any difference for people with chronic spinal cord injury? Probably not along the lines of two levels of AIS score improvement. However, the Sapporo group has published a rat study using bone marrow MSC cells injected at ten weeks, which they consider chronic. Results: yes, the animals improved compared to controls (placebo):

...the systemic infusion of MSCs results in functional improvement that is associated with structural changes in the chronically injured spinal cord including stabilization of the BSCB, axonal sprouting/regeneration and remyelination.

The Yale-Japan clinical trial included only cervical injuries. What about the rest of the SCI population? The Japanese regulators ruled that Stemirac can be used in all traumatic spinal cord injuries, including children.

What about AIS D patients? None were included in this study and the regulators said no to treating the Ds:

The efficacy and safety of the product in patients with AIS D should be investigated in another clinical study.

Bottom line
This line of patient-derived stem cells appear safe and beneficial in this small trial. It’s too early to draw conclusions, and no, you can’t say doctors have figured SCI out, but here’s the hopeful spin from the PR office at Yale:

Kocsis and Waxman stress that additional studies will be needed to confirm the results of this preliminary, unblinded trial. They also stress that this could take years. Despite the challenges, they remain optimistic.

“Similar results with stem cells in patients with stroke increase our confidence that this approach may be clinically useful,” noted Kocsis.

“The idea that we may be able to restore function after injury to the brain and spinal cord using the patient’s own stem cells has intrigued us for years,” Waxman said. “Now we have a hint, in humans, that it may be possible.”

Have you read a recent news article about a “breakthrough” in spinal cord injury research, but are left with questions or doubts about what it means and when its impact could be felt? Email it to us at unite@u2fp.org.