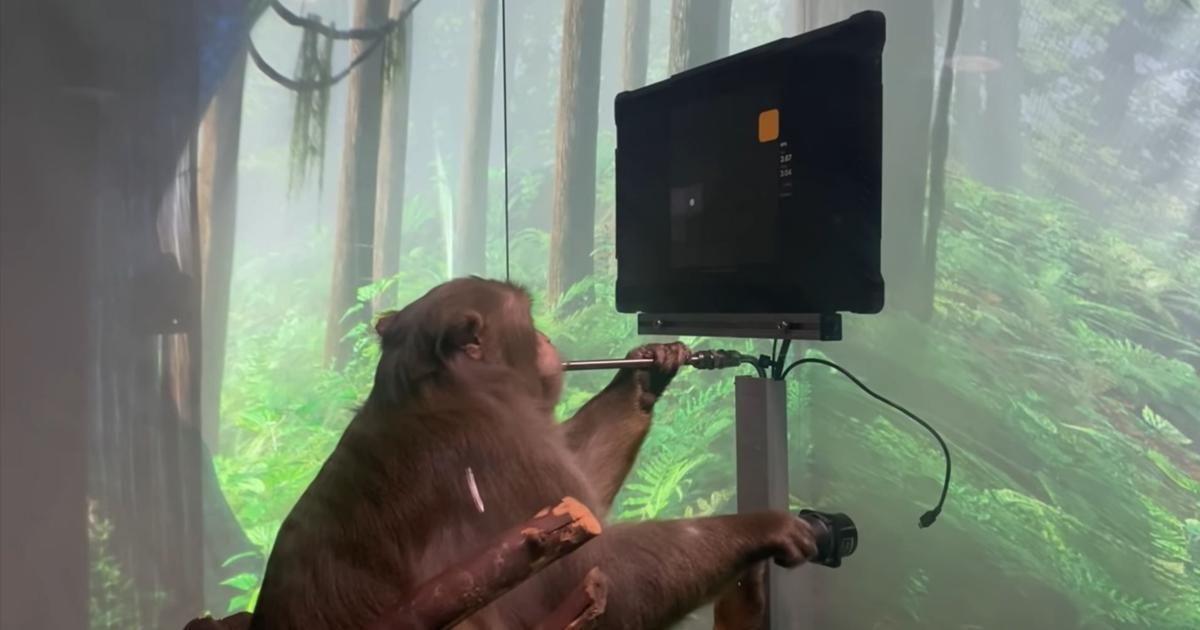 Ok, you probably heard about this or saw the video clip of the monkey playing a computer game with his brain. The headline is from Forbes.

Note the first red flag: revolutionize. This word never adds up to anything but bait. The headline is for sure overstated, but the story itself is only partly lure.

Pager, a little nine-year-old rhesus monkey, plays games on a screen, sipping on a banana smoothie as a reward. Check out the video.

First, he uses a joystick to line up a dot with squares. Then, we are shown, the joystick is unplugged, and yet he still targets the dot and later plays the old school computer game, Pong, and pretty well at that.

Pager has a brain implant, below the scalp and about the size of three quarters stacked up. It picks up nerve signals from his brain and links them with software to control a computer cursor. Sure, pretty cool. But while the brain chip design might be new (from Elon Musk’s Neuralink), animals with brain chips moving computer cursors, gee whiz that’s so 2000s.

The Musk Effect
The latest monkey mindpong story would not have been deemed newsworthy without the Musk megaphone. Billionaire Musk’s success in cars and rockets has given him an outsized selling platform and 51.5 million followers on Twitter.

Last summer, when Neuralink first introduced its chip (using a pig model - it didn’t do anything except display nerve activity from the chip), Musk speculated shamelessly about its potential:

To be sure, in the new case, Pager is a fully functioning monkey with normal hand function. Still, Neuralink has stated its first goal for the technology “will be to help people with paralysis to regain independence through the control of computers and mobile devices.”

Our devices are designed to give people the ability to communicate more easily via text or speech synthesis, to follow their curiosity on the web, or to express their creativity through photography, art, or writing apps.

Musk reiterated his market targeting last week, responding to Hamoon Kamai, a guy on Twitter paralyzed below the shoulders who tweeted to Elon that he’d be down for a clinical study of the brain implant.

Neuralink is working super hard to ensure implant safety & is in close communication with the FDA. If things go well, we might be able to do initial human trials later this year.

Musk later added some fanboy humor: “Soon our monkey will be on twitch & discord haha.”

Does this matter to users?
I didn’t run this by researcher experts in brain machine interfacing, or BMI. Instead, I asked a pair of potential users, both tetraplegics with no hand function. Would dialing a phone or livestream gaming on Twitch with only your brain be a desirable outcome?

Mark Willits, a C2 tetra from Arizona who uses a vent, likes the possibility he could email using just his brain, without using a mouthstick. “My teeth wouldn’t mind if my brain powered my phone once in a while – this stick gets heavy after hours of use. But I will definitely not be the first to line up to have an electrode implanted in my brain!”

C5 Ian Burkhart, on the other hand, actually was one of the first guys in line and has had a visible implant the size of a nine volt battery in his head for seven years. He has been part of a series of experiments with brain-machine control at Ohio State. In 2016, you might remember the news that he was able to play Guitar Hero using just his brain.

His take on the Musk chip? “Everything Neuralink has done so far has already been done. The Nicolelis lab at Duke, for example, did an experiment with monkeys using a wireless brain-machine interface in 2014. But what’s different is the type of brain implant.”

Burkhart, who continues to participate in studies using his brain signals to move his arms and fingers, has what’s called the Utah array installed in his head (named for the Utah company Blackrock that makes the chip).

Is Musk showboating or is this for real? Too soon to tell, there’s no real data to dive into, plus Musk is a showman and skilled promoter, but Burkhart thinks it’s good for BMI. “I think overall the Neuralink report with the monkey playing Pong is good for the field. It legitimizes the work of many other labs.”

Would Burkhart consider getting one of Musk’s devices? “You have to balance the excitement for the technology with not giving false hope to people, but yes, I would be open to it. It would likely be an upgrade for me.” Burkhart’s implant has 96 channels. The Neuralink device has over 1000 channels, and it’s fully under the skin.

Is Neuralink safe? Burkhart expects that it will be. “My own experience with the FDA has convinced me they are not going to let anything sneak through the approval process. It has to be good, and proven safe.”

So, let’s give this research news a qualified nod. But as Burkhart reminds us, the BMI field is still in its infancy. “You have to pump the brakes on the enthusiasm a little – we’re not there yet.”