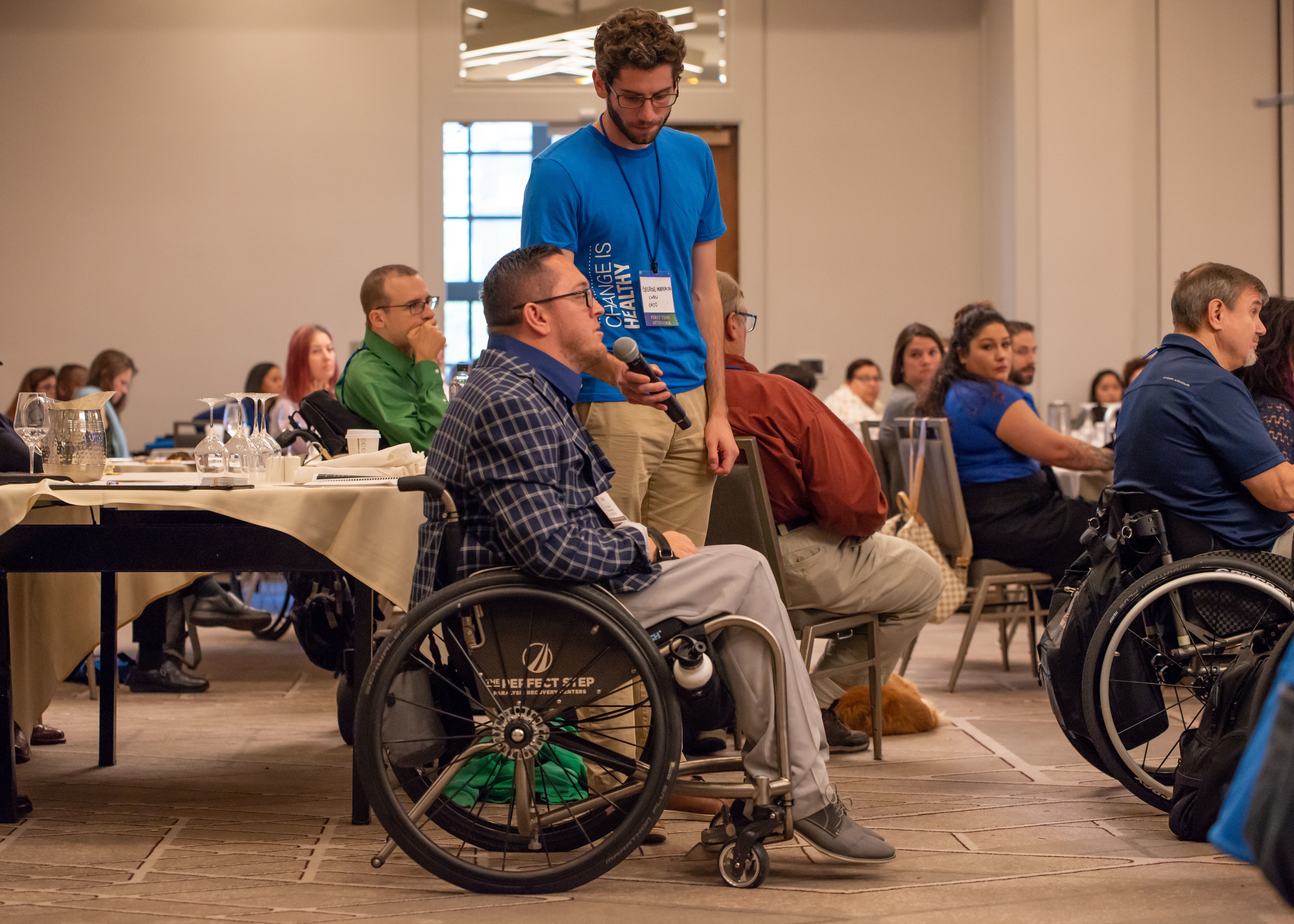 Unite 2 Fight Paralysis Annual Science and Advocacy Symposium is the best way to find out about the science to heal the injured spinal cord. This is also the place for members of the spinal cord injury community to join in to help speed progress.

Mark the date: this year’s Symposium is October 22 and 23 in Salt Lake City, Utah. You can view the current agenda here, our speaker lineup here, and hotel info here. Then go register online here.

This article is the first of three with background and context for the 2021 Symposium, a look at who’s presenting what, and why.

First, why Utah? That’s easy. The Symposium was originally set for Salt Lake City (SLC) in October 2020 but went virtual due to COVID. SLC was chosen to celebrate the opening of the Craig H. Neilsen Rehab Hospital at the University of Utah, which is the title sponsor for U2FP's 2021 Symposium.

Neilsen, the late casino magnate, philanthropist, and tetraplegic, was an MBA and law school graduate of the U; his foundation donated $47.5 million to build the rehab hospital. The Neilsen Foundation is also a Visionary Level sponsor for U2FP’s 2021 Symposium.

Second, what happened to Working 2 Walk? The name has been changed (Annual Science and Advocacy Symposium) because ‘walk’ is not the most appropriate action verb; it’s an overstated metaphor for what U2FP and its research advocacy mission are about. We’re still advocating for cures, just recognizing that many potential therapies can be significant life-changers but don’t address ambulation.

(In the header image, above, Hal Hargrave of The Perfect Step asks a question of a scientific panel at U2FP's Annual Symposium in Cleveland, 2019.)

So, feel free to mix it up with the scientists, and they will vice versa with you. Scientists are eager to meet the SCI community, it helps humanize and motivate their work. There are many opportunities during the Symposium —and after hours in and around the hotel — to network. So don’t be shy, let the scientists know what is important for you, and if you don’t understand something, ask!

Keeping a Wide View
Discovery science is a big part of the Symposium, but it’s only part of a greater strategy required to produce new therapies. U2FP sees a long continuum within a risky and imperfect system. Therapies start out as ideas that need funders. Then, if something pans out, preclinical people hand off animal results to clinical people. Human clinical trials are long and costly, and most never make the finish line. But, if trials go well, regulatory approvals are the next hurdle. Commercialization has its own challenges, including the crucial ingredient of insurance reimbursement. The U2FP approach brings all the players to the podium — scientists, clinicians, funders, industry people, regulatory people, along with advocates from the SCI community.

Three Rs for Recovery
To frame the Symposium research agenda, let’s start with the most basic question: What does an injury actually do to the cord? (Ed. note: we fully appreciate the need to study acute spinal cord injury. U2FP’s focus is on chronic injury.)

The spinal cord is usually injured by a high impact force that exceeds the protective armor of the backbone. There are a lot of ways the cord can be damaged without trauma (congenital, tumors, stroke, neurological disease, surgical error, etc.).

Some nerve cells in the damage zone die right away, and they’re gone. Nearby, others are in peril, and many succumb hours and days later as the injury site becomes toxic to cells. What if we were to REPLACE lost cells or rebuild the mangled cord structure to encourage recovery?

Some spinal cord cells survive trauma but lose their axons, the long extensions akin to wiring. Many of these cells attempt to recover and project axons – but they get stuck. Could we unstick them, bump up their power, REGENERATE them, and then direct growing axons to reconnect appropriately?

Many cells and cell networks in the injured spinal cord are alive but disconnected from the primary information circuits between brain and cord. Can we REJUVENATE the spared parts of the spinal cord, tapping into inherent self-repair mechanisms, or perhaps the innate smartness of the spinal cord itself?

In this article, we will explore the REPLACE part of the 2021 Symposium agenda. In subsequent posts, we will look at the other Rs, regeneration and rejuvenation.

Cells and Scaffolds
Cell transplantation is a potential strategy that seems simple enough; a new cell replaces a missing or broken one. Of course, it’s not so easy. Which cells are best to use, when should they be transplanted? Where is the best place to put them, and what are the transplanted cells really doing — merging into the body or acting as compost? Stem cells also come with a major caution: because these cells are capable of vigorous growth, they are capable of tumorous growth.

Replacement cells have already been implanted in various forms in several human clinical trials for SCI. The first FDA approved SCI stem cell study, the Geron trial, began in 2010; that same cell line, derived from embryonic cells, continues to be looked at today for acute SCI (now under the direction of Lineage Cell Therapeutics). The company reports that its cells have significantly improved function in a handful of trial participants; more trials are coming to validate this claim.

The first session Saturday morning, October 24 is about adding cells to the injured spinal cord: “Replacement Strategies to promote regeneration across the continuum from translational science to clinical validation.”

Lane says the lab also hopes activity based training or electrical stimulation might enhance the effect of the cell transplants.

The two other panelists, Jacob Koffler from the University of California - San Diego, and Andrew Pelling from Spiderwort, share Lane’s concern about cell selection and survival, and suggest that physical supports, or scaffolds, are a potential solution.

Scientists from the Mark Tuszynski lab at the University of California in San Diego, including Koffler, have been transplanting and growing stem cells in animal models for many years. The group has tested neural progenitor cells (NPC), a type of stem cell that can become different types of nervous system cells. Problem: how to keep NPCs alive within an injured spine long enough for them to initiate repair. To address this, the lab designed and printed customized scaffolds to implant in the spinal cord. The scaffolds contain substances that reduce inflammation to protect growing nerve cells and feature tiny channels to encourage growing nerve fibers to move toward neurons on either side of an injury.

Early studies indicate that this worked. One month after implantation in rats, Koffler saw numerous new nerve cells growing in the intended direction through the scaffolds. After six months, rats that received the scaffold and NPCs showed the growth of new neurons extending into the rest of the spinal cord. The animals regained some movement in their back leg joints. Rats that received only NPCs or only empty scaffolds did not show functional recovery.

The Tuszynski group published the scaffold results two years ago in Nature Medicine. Koffler, first author of the study, will share the work, its progress and potential.

Pelling is a biophysicist at the University of Ottawa and co-founder of Spiderwort, a startup that uses plant tissue, e.g. asparagus, to direct cell growth after injury. Pelling describes his lab environment as a blend of science, scavenging, hacking, engineering, design and art. He made a splash with a TED talk about growing human ears out of apples.

Spiderwort’s spinal cord scaffolding product, Cellubridge, got an FDA Breakthrough Device designation, which could speed it toward clinical trials. Pelling will tell us how that’s going.

Next week we will share more detail about the 2021 Symposium agenda.