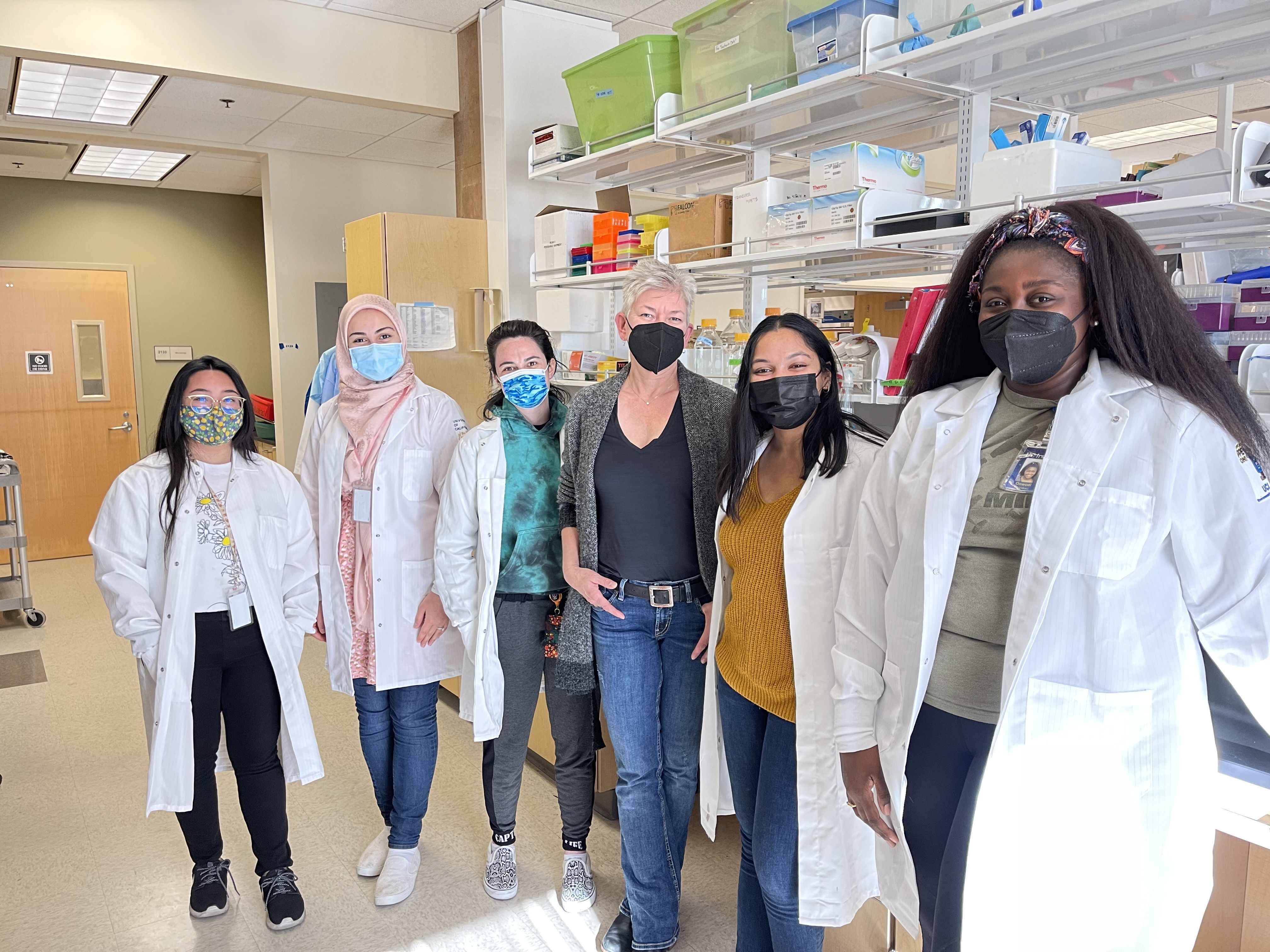 Scientist Aileen Anderson (pictured above), who directs the Sue & Bill Gross Stem Cell Research Center at the University of California Irvine (UCI), was recently awarded $5.5 million from the California Institute for Regenerative Medicine (CIRM) to develop a new human neural stem cell line for large scale manufacturing. Her project is worth noting because the ultimate target is to put solid science behind a safe and predictable therapeutic for chronic cervical spinal cord injury.

But what really makes this newsworthy is that it reframes Anderson’s pioneering work in stem cells and revisits the central role her studies played in one of the greatest ever spinal cord injury research fails.

Let’s be clear. Failure is not the issue. It’s a fundamental part of the scientific process, and quite expected. As anyone who follows SCI research can attest, there have been very few successes over decades of failures. But this is a story that’s beyond an experiment that didn’t work as hoped. It’s about mismanaged expectations (mea culpa) and it’s about haste, exaggeration, short-term investor myopia, corporate public relations embroidery, and a system that does not reward incremental success.

Anderson and her scientist husband Brian Cummings did preclinical studies for a human neural stem cell line (called HuCNS-sc), derived from fetal brain tissue and owned by a Bay Area biotech start-up, Stem Cells, Inc. Anderson and Cummings were not doing stem cell science but were recruited by the company because Anderson, who specializes in immunology, had developed a special animal model that would not reject human cell transplants.

The scientists tested the stem cells in mice with “early chronic” contusion injuries (30 days post). The human cells promoted locomotor recovery, enough so to convince the publicly traded company (then listed on Nasdaq as STEM) to fund a 2010 clinical trial in Switzerland.

Success in T-level injuries in mice of course doesn’t mean human paraplegics would regain noticeable function – one could argue that a mouse model is too unlike the human situation to be tenable in the first place.

Twelve individuals, three to 12 months post thoracic SCI, were included. The trial was completed in April 2015. The company reported the cells were safe and that seven of 12 showed sensory gains that likely would not have occurred spontaneously.

So how about quads, where one level of spine could mean use of fingers or hands? That’s certainly a more interesting clinical and commercial target.

Moving up the spinal cord, however, is not so simple. There are major differences in anatomy, autonomic function, and immune response. Cell transplants could create effects in cervical SCI that wouldn’t be obvious in thoracic SCI models. You can’t assume safety or efficacy in the cervical area based on thoracic modeling.

So, two things happened. In December 2014, five months before the thoracic results were reported at a medical meeting, Stem Cells, Inc. announced the Pathway study, a clinical trial to dose 52 individuals with chronic cervical injuries (up to two years post) with HuCNS-sc. Meanwhile, the Anderson lab had already set about to test the cell line in animals with neck-level injuries.

Anderson said they ran animal experiments with two versions of the cells, a research line, and a clinical line. They saw “no evidence of efficacy” in the clinical version, and indeed, some data showed a “negative impact.” The data were presented to Stem Cells, Inc.

The company went ahead anyway — using a cell line they stated later was not even the same as the one Anderson found lacking; the Pathway study apparently used stem cells that had not been cleared through any preclinical tests.

You might wonder, is that legal, or ethical? It was OK with the FDA, which does not require pre-clinical testing of cell line variations if they are “comparable.”

Ethically, this seems murky. If I am a doctor putting these cells in people, or a patient in a stem cell clinical trial, shouldn’t I know that the cells they are putting in my body are the same as what’s been tested?

In the fall of 2016, Stem Cells, Inc. reported preliminary data for the first six participants in the cervical trial. It was very exciting news, though one must be careful interpreting this kind of information from the company that benefits from unpublished preliminary spin. From a company press release:

“... we have three patients who pre-transplant were unable to pick up a key and insert it into a slot — after transplant they were able to pick up the key and insert it into the lock and turn it at the full 90 degrees ... These findings demonstrate the ability of our HuCNS-sc cells to improve both muscle strength and motor function, thereby changing the trajectory of recovery following a spinal cord injury.”

Hurry Up and Stop

The recovery of hand function in chronic quads was very encouraging news. But in May 2017, after only 17 patients had been dosed, the trajectory took a different direction. Straight south. The trial was abruptly ended and Stem Cells, Inc. closed up shop.

Yes, the stem cells had some effect, but the “magnitude” of effect over time did not trend well enough to spend more money running the trial. The company concluded “that achieving the primary endpoint objective of the Pathway Study would be unlikely.” The company said it still believed in the cells and hoped some biotech knight would come to their rescue, but that Stem Cells, Inc. didn’t have the wherewithal to warrant further investigation.

Huhn appeared at the U2FP annual symposium the following October. He defended the company strategy and said the Pathway experience was not a failure but an “outcome.”

Note: Stem Cells, Inc. did try to find a suitor to take on the HuCNS-sc promise, as Geron did after their much-publicized SCI stem trial ended abruptly in 2011 before being rescued by Asterias, and currently by Lineage Cell Therapeutics. Stem Cells, Inc. ended up selling kit and kaboodle in November 2016 to a little company called Microbot, which has hopes of selling self-cleaning shunts and has zero interest in stem cells. They just needed a market vehicle to participate on a stock exchange, in this case swallowing Stem Cells, Inc. and taking its spot on Nasdaq (now trading as MBOT).

Anderson published a paper about the Stem Cells, Inc. experience, “Preclinical Efficacy Failure of Human CNS-Derived Stem Cells for Use in the Pathway Study of Cervical Spinal Cord Injury.” From the paper:

These data raise questions about the development and validation of potency/comparability assays for clinical testing of cell products, and lack of US Food and Drug Administration requirements for in vivo testing of intended clinical cell lines.

. . . since the Pathway Study failed to show efficacy in humans, we will never know if this failure was because neural stem cells, in general, are not effective for human SCI or, rather, that the wrong cell line was tested prematurely in humans.

And this brings us back to the new California Institute for Regenerative Medicine (CIRM) money, chronic SCI, stem cells, and the Anderson lab. Back in 2016 CIRM funded Anderson’s lab to  screen new neural stem cell lines to help answer the question she posed in her paper. This latest CIRM money now helps her lab study the most promising cell line they identified to assure its potency and set it up for large scale manufacturing.

What’s this new grant about? What’s different than your previous stem cell work?

The main difference for this project is that we set out to generate a larger number of neural stem cell lines so that we could proactively identify some lines that showed efficacy and some that failed, and then use that information to develop a transcriptomic profile that can predict those outcomes. This (we hope) gives us a way to monitor the GMP line [Good Manufacturing Practice, a system that ensures the cell lines are consistently produced and quality controlled] we are moving ahead with during expansion and development/scale up, reducing the potential for things to go off the rails. In this grant, we also try to develop a way to establish some element of allogeneic tolerance [cells from another person would normally be rejected and could require administration of immune suppression drugs — the goal here is to avoid rejection], which we hope will increase the viability of allo transplantation in the clinic.

We want to predict any potential failure during manufacture of the therapeutic product., e.g. a change in cell purity/identity, for example, inadvertent selection of a subpopulation of cells that is not as beneficial during manufacture/scale-up, introduction of a karyotypic abnormality [chromosome change] (which could cause aberrant growth), loss of potency (whether the cells survive or yield efficacy after transplant), etc.

How do you achieve allogeneic tolerance—you want patient immune systems to sort of look the other way?

Exactly. This works by targeting the T-cell subsets that become activated in response to the allogeneic transplant to get rid of those and enhance the regulatory T cell population instead.

So, how many neural stem cell lines were looked at?

We generated and/or tested an additional eight lines with our most recent CIRM grant. We used the large number of lines to test the variation between lines, and whether we could develop a tool that could help us predict efficacy—something that really has not been done before for neural stem cells. We selected the best performing GMP line and are taking that forward for pre-clinical development in the current project.

This tool to predict efficacy, this involves a gene profile?

We hope the gene profile will be a way to monitor some of the critical elements needed for the FDA during cell manufacturing— this includes monitoring the purity, identity, and potency of the therapeutic product. Whether that holds up is one of the things we will test in this current project.

Can you explain what the cells do after transplantation, and is the mechanism different now than it was with Stem Cells, Inc cells?

Nope. Not because I don’t want to, mainly because I really think there is no single mechanism. These cells do myelinate [provide a sort of insulation for nerve fibers] but it is not clear that that is the means of recovery. Indeed, there is emerging evidence from our lab and others that neural stem cell transplants are quite pleiotropic [have more than one effect].

The previous CIRM grant and this new one are built exclusively around chronic SCI. I think the unmet medical need in this population is so great that it just demands its own focus.

Fair to say you still see potential in stem cells as a therapy?

The potential of stem cells and regenerative therapies to really reshape many aspects of medicine is not going away, but we have to understand that it is going to take more than one shot on goal to realize that potential. This is a next shot on goal. I think it’s a good one, but it won’t be the last. A success will be to help us understand more and what to do for the efforts that will follow—from us or anyone else.

Any lessons or cautions from the Stem Cells, Inc. trials you could comment on?

My thinking about how to go forward was certainly influenced by that experience, but not only that experience. There are many companies that have not been able to bring good preclinical data with cells through to translation. On top of that, I have real concern with the cost of cell and regenerative medicine therapies, despite the potential. My lesson learned is to have and keep control of your therapeutic candidate as long as possible. I would love to see academic medical centers be able to hold the biological license for a regenerative medicine/stem cell therapy and keep the cost and care delivery controlled.

PS - If you value U2FP's work to compile, condense and contextualize complex SCI science (like the above story), consider making a year-end gift.