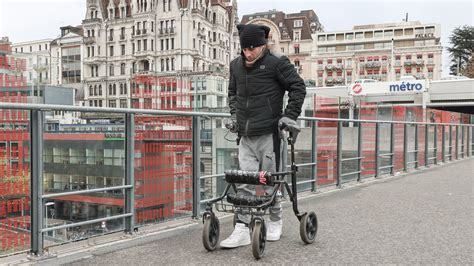 (Above, Michel Roccati walks through a courtyard with the help of a new neurostim device)

The implant was developed by a group in Switzerland led by Grégoire Courtine and Jocelyne Bloch, both from Swiss Federal Institute of Technology in Lausanne; both are also affiliated with a collaborative research and clinical center called .NeuroRestore, and also with the neurostimulation company Onward, which manufactured the stimulator device.

Both researchers appeared at the 2021 U2FP Science and Advocacy Symposium last October (watch them here). I’m sure they would have loved to describe this work -- the unwritten rule is to wait until something’s been published before going public with it.

The press around the globe picked up the story. Here are the CNN and BBC takes on “paralyzed man with severed spine walks” using a gadget that “puts people with paralysis on their feet again.”

This study features impressive device design, software development and surgical skill. It’s similar to other neuromodulation studies – implanted electrodes on the surface of the spinal cord activate dormant nerve networks in individuals with paralysis, leading to some functional recovery. As in most other spinal cord stimulation trials, these men received a ton of physical therapy for months after their surgery.

What’s new?
This is the first time people with motor and sensory complete injuries have benefited to this extent – walking – using spinal cord stimulation.

Although the three participants here were not at first fully bearing their own weight, they were able to initiate walking patterns immediately after switching on the device.

The research team used a longer and wider implant device designed for SCI, as opposed to the off the shelf pain treatment devices used in all previous studies.

Since the dawn of the spinal cord injury neuromodulation era, dating only about 13 years when the Susan Harkema group in Louisville put a spinal cord stimulator in Rob Summers (see a very good history here), the underlying science mantra was that the spinal cord is smart – it knows what to do, it wakes up if it gets the right sensory input, via exercise, or stimulation, or maybe a drug. Researchers have longed to use an electrode array specific to SCI rather than the ones available, made to treat back pain. Here we have the first such device.

The new device activates dorsal spinal nerve roots – nerve bundles that merge into the cord and bring in sensory information from peripheral nerves. This stimulation animates motor nerves in the leg and trunk muscles. Electrode placement is critical. Here, the researchers used MRI to model the exact spinal cord anatomy of each participant. Some slick programming was added to optimize electrode siting and firing patterns. User control was added.

Central to this radically increased efficacy compared to previous studies was an arrangement of electrodes that targeted the ensemble of sacral, lumbar and low-thoracic dorsal roots involved in the production of leg and trunk movements, combined with a software that renders the configuration of activity-dependent stimulation programs rapid, simple and predictable.

This study is a subset of a clinical trial called STIMO (STImulation Movement Overground) that is specifically about improving walking. The device appears to perform like a prosthetic - they call it biomimetic epidural electrical stimulation (EES). It sends bursts of precisely patterned electricity to force specific muscle firing patterns. In this case, the patterns were calculated for walking, swimming, and cycling. After a time, users could initiate leg squats and use a leg press, walk in a little bit of snow, and on slightly uneven surfaces.

On the first day, all three participants could step independently on a treadmill, although gait patterns exhibited poor extension components. Consequently, substantial amounts of body-weight support were necessary. After 1–3 additional days, gait patterns were sufficiently optimized to enable the three participants to ambulate independently overground while supported in a multidirectional body-weight support system after training, five days a week for five months.

Although this new lead allowed the validation of our therapeutic concepts, the fixed coverage and uniform distribution of electrodes were inevitably suboptimal. Therefore, we anticipate that delivering this therapy across the human population may require a library of paddle leads or even personalized leads

Walking on demand, by say pushing an indicator or a smartwatch, breaks somewhat from what the rest of the SCI neuromod field has been focusing on. Most experiments are looking in less media-sexy areas -- blood pressure management, bladder or bowel control, pain control or maybe trunk stability. Onward, a publicly traded company that always likes to deliver good news to investors, says they’re hoping spinal cord stimulation works for many issues common to people living with SCI. But this study, it’s about walking.

Readers can watch this video that shows one of the guys in the Swiss study, Michel Roccati, using his stim system to stand in a bar; he is quite emphatic in his endorsement for using the system out in the community. Judge for yourselves what meaningful means, whether, as Michel was quoted, “It’s almost a normal life,” and whether this kind of walking would dare you to leave your wheelchair behind.

Does it move the field forward? Yes. Although this is a small sample size, it sets up a larger study that will take a few years to work out.

Is it a cure?
No. Here’s Courtine on this:

This is not a cure for spinal cord injury. But it is a critical step to improve people's quality of life. We are going to empower people. We are going to give them the ability to stand, to take some steps. It is not enough, but it is a significant improvement.

A cure requires biology – some regeneration of the spinal cord, possibly with cell therapies or gene modification. Courtine suggested that perhaps his implant technology could be used in combination with nerve regeneration treatments somewhere down the road.

OK, so when will this new stim walk implant be available? In news stories, the research team said the device, or something like it, might be available in four to six years. Five years. Where have we heard that before, handing research off to the clinic?

Five years …. far away enough for us to cut them slack on engineering and testing the potential, but close enough for everyone to remember if five years becomes 10.

Meanwhile, let’s applaud the effort and get on with more human studies.