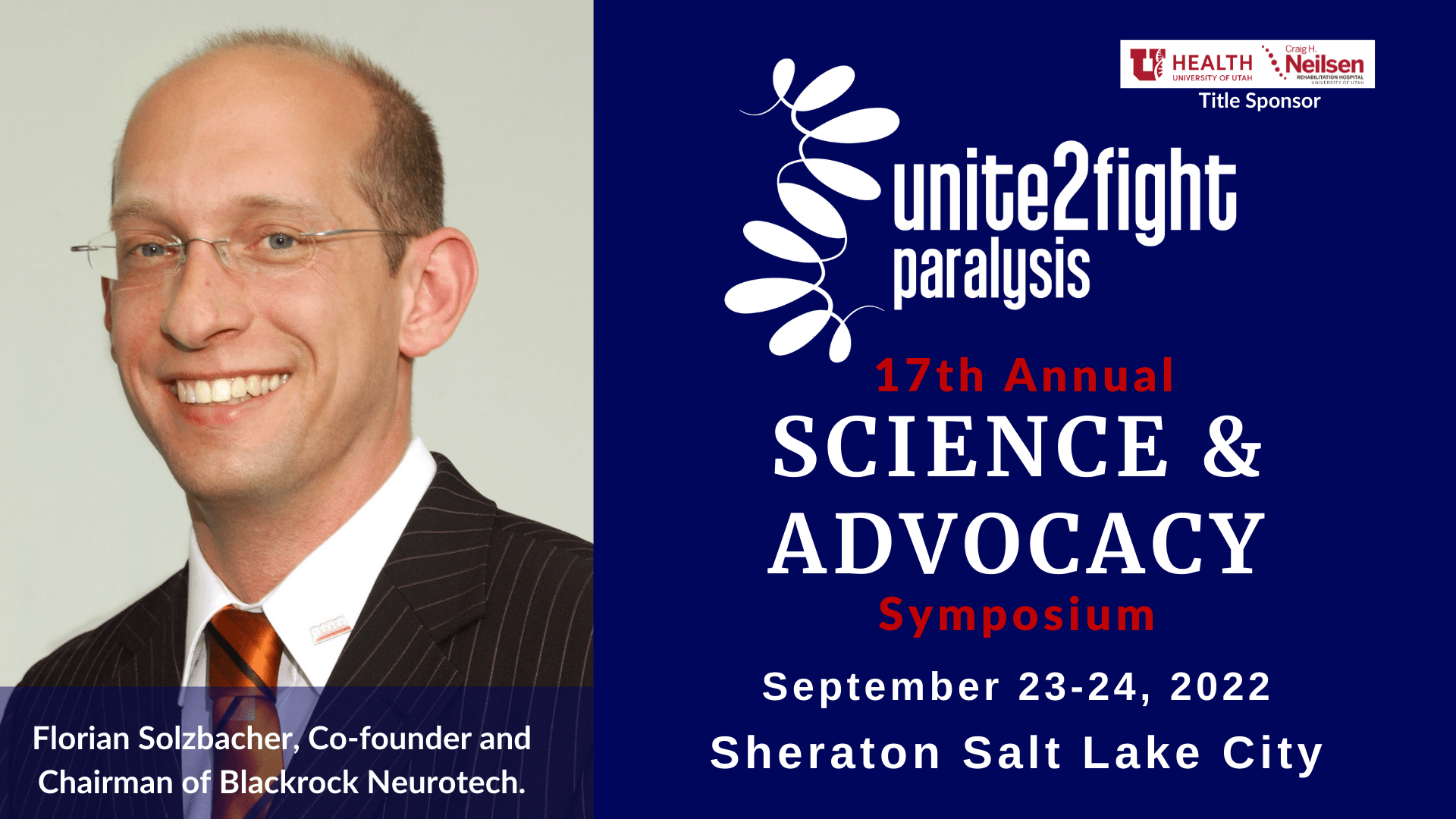 Unite to Fight Paralysis is very grateful to Blackrock Neurotech for supporting our 17th Annual Science and Advocacy Symposium, September 23 and 24 in Salt Lake City, UT (register here). Blackrock will also be presenting during the Industry portion of our agenda. Here’s some background on the company, and on its co-founder and chairman, Florian Solzbacher.

Solzbacher spoke at the 2021 virtual Symposium (watch it here starting at 3:26). He’s not only an engineer and entrepreneur, but he has much to share about moving a tech innovation down the pipeline from design to human use. It all starts, he says, with the users. “Blackrock is driven by the needs of people—you have to start with what the person needs.”

Important advice from Solzbacher to the community of people who may benefit from a tech innovation: “Voice what your priorities are so that the devices meet your needs.”

Blackrock, based in Salt Lake City, makes a tiny, implantable electrode device called the Utah Array. This records activity of individual neurons in the brain. These signals can then be interpreted and processed with computer software to enable users to restore movement or sensation using only their thoughts.

To be sure, Blackrock has been the primary narrator of the brain computer interface (BCI) story. This technology has been implanted in 34 people, and 31 of them use the Utah Array. Over the past eighteen years, Blackrock's devices have enabled people to eat, drink, type, make art, or control robotic arms using just their brain signals.

This week, Blackrock announced that users of its BCI implants reached a milestone of 30,000 days of in-patient research usage, 20 times longer than any other implantable BCI technology reported to date. Says Solzbacher:

“Most people have the perception that implantable BCIs are still in the early days of research, but the fact is, our products are guided by safety and efficacy data dating back to 2004. We've been restoring patient function for almost two decades, as demonstrated by this milestone, and we believe the technology is ready to move out of the lab and into patients' homes.”

U2FP has covered BCI tech for many years, including having one of Blackrock’s pioneer users, Ian Burkhart on the podium. His implant lasted more than seven years and enabled him to regain motor and sensory control of muscles in his arm and hand. He could type, move objects, feel sensations, and made the news when he learned to play Guitar Hero in 2016.

Burkhart, whose implant was removed in 2021, says that, if given the chance he would get another brain implant. "Knowing the technology and knowing where it's going – I definitely would do it again because I know it's something that would improve my quality of life."

Dennis DeGray, a California man who was spinal cord injured 18 years ago, is another super user Blackrock BCI pioneer. The New York Times Magazine featured him last month: “The Man Who Controls Computers With His Mind.” Per the article, DeGray “has spent more than 1,800 hours spanning nearly 400 training sessions controlling various forms of technology with his mind. He has played a video game, manipulated a robotic limb, sent text messages and emails, purchased products on Amazon and even flown a drone — just a simulator, for now — all without lifting a finger.”

DeGray is now the world’s fastest thought typist. He can think-write faster than people can write text on a cellphone. From the NYT:

The scientists recorded neurons firing in Dennis DeGray’s brain as he visualized himself writing words with a pen on a notepad, trying to recreate the distinct hand movements required for each letter. He mentally wrote thousands of words in order for the system to reliably recognize the unique patterns of neural activity specific to each letter and output words on a screen. “You really learn to hate M’s after a while,” he told me with characteristic good humor. Ultimately, the method was extremely successful. DeGray was able to type up to 90 characters or 18 words a minute — more than twice the speed of his previous efforts with a cursor and virtual keyboard. He is the world’s fastest mental typist. “Sometimes I get going so fast it’s just one big blur,” he said. “My concentration gets to a point where it’s not unusual for them to remind me to breathe.”

Blackrock Neurotech plans to submit its first commercial BCI device, MoveAgain, to the FDA this year. There will be challenges getting this to market and getting it paid for.

Solzbacher says BCI devices and surgery must be affordable, cost-effective, compatible with medical staff training and with existing hospital workflows – this technology can’t just be in the hands of only a few people who can do the implants. But he sees the upside: better materials, better software and perhaps a more favorable regulatory and reimbursement landscape.

“We’re not talking about a 5, 10 or 30 percent improvement in efficacy,” he says. “People can do something they just couldn’t before.”