Stem Cells are on the California Ballot Again 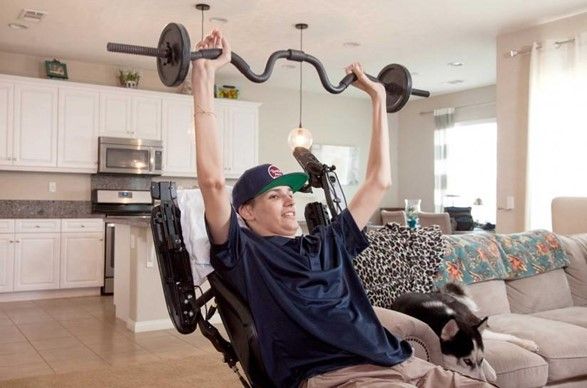 Let’s talk for a minute about stem cells. You may not be hearing as much recently about cell therapy research, but I assure you an army of stem cell scientists remains in hot pursuit of this potential therapy.

This year’s Working 2 Walk Symposium (register here) features Neurosurgeon Mohamad Bydon, who is currently involved in a 40-patient stem cell trial at the Mayo Clinic in Minnesota. They call it CELLTOP, a Phase II study of “autologous adipose [fat] derived mesenchymal stem cells in the treatment of paralysis due to traumatic spinal cord injury.”

In a smaller preliminary study last year Bydon reported remarkable recovery for one “super responder” (read our coverage here, listen to an interview with Bydon on our CureCast podcast). Chris Barr, 53, broke his neck in 2017 and was diagnosed as AIS A: complete motor and sensory paralysis below his injury. After a decompression surgery there was robust recovery – he had converted to AIS C. Barr was thinking that was it for recovery but enrolled in the small experimental trial at Mayo. He was injected with his own processed fat cells. Yes, he got more recovery, could walk, got interviewed by Christopher Reeve’s son Will on ABC’s Good Morning America.

At W2W, Bydon will discuss the trial and what (besides recovery) they’re really after: how come some respond to these stem cells and others do not?

(Note: this Mayo stem cells study was funded in part by the Minnesota SCI/TBI Research Grant Program, which was passed into law by a passionate group of SCI activists, including U2FP.)

Stem cells are on the California ballot. Again. Sixteen years ago, voters overwhelmingly supported Proposition 71, which created the $3 billion California Institute for Regenerative Medicine (CIRM). The agency has spent just about all the money, and they’re asking for more, Proposition 14, this time for $5.5 billion. If they don’t get it they will either disband or adapt, perhaps as a nonprofit of some sort.

To be honest, California’s 2004 vote was a giant bafangool to George Bush and his administration, which had banned research for all but a handful of embryonic stem cell lines. Stem cells and their regenerative magic were still a novelty storyline in the American mind, but a powerful one, made all the more so by aggressive Prop 71 marketing that pretty much predicted cures for Alzheimer’s, Parkinson’s and spinal cord injury.

Christopher Reeve lent his fame to the cause, delivering this exaggerated take on Prop 71 in a 30-second TV ad: “Stem cells have already cured paralysis in animals. Stem cells are the future of medicine. Please support Proposition 71 and stand up for those that can’t.” Alas, that was to be Reeve’s final act of advocacy. He died three weeks before Prop 71 was decided.

So, what now? CIRM money did a lot of good, trained a lot of people, built a lot of buildings and prompted a lot of valuable research and dozens of clinical trials. This is from the pro-14 California Stem Cell Research, Treatments, and Cures Initiative, comprised of people in the academic/research/industry/patient advocacy sphere:

"To date, research funded by CIRM has led to more than 2,900 published, peer-reviewed medical discoveries and has enrolled, or is expected to enroll, more than 4,000 patients in more than 90 clinical trials. This research has saved the lives of children born without a functioning immune system, and it has changed the lives of people living with chronic diseases and conditions, including diabetes, kidney disease, leukemia and blood cancers, blindness, spinal cord injuries and cancer."

(The spinal cord injury part comes back into focus in a minute.)

The pro-14 group wants voters to think of CIRM not as a big leak in the state budget but as an engine of growth. They point to a recent USC study: CIRM projects have created more than 55,000 full-time equivalent jobs in California, generated more than $640 million in state and local tax revenues and increased the state’s economic activity by more than $10.7 billion.

What’s not to support? Well, despite widespread loathing in California for the present occupant of the White House, there’s no federal bogeyman standing in the way of stem cell research. Now, with the pandemic and its assault on the economy, money is much more precious. But the real fly in the soup: CIRM didn’t deliver on any big-ticket cures.

CA Governor Gavin Newsom has endorsed Prop. 14. The Democratic Party supports it. The Los Angeles Times favored 71 but the paper came out against 14, suggesting backers hold off a couple of years to let the economy catch its breath. Several major newspapers oppose it. The San Francisco Chronicle says no: “…with the pandemic, wildfires and more stretching the state’s resources, stem cell research looks like an even more unlikely gamble for a government with more pressing priorities.” San Jose Mercury News: “It’s time for California’s stem-cell agency to continue its work as a self-sustaining non-profit or close down and allow federal grants and private business to push the industry forward.”

No sign of any celebrity endorsers but two young guys with cervical spinal cord injuries, both recipients of CIRM-funded stem cells, are doing what they can to rally support.

Jake Javier, from the Bay Area, and Kris Boesen, from Bakersfield, participated in a clinical trial for embryonic stem cells (oligodendrocyte precursor cells, to be exact) administered within the first 30 days of their injuries. You may recall this was the groundbreaking Geron trial, and later, when these guys were in it, the Asterias SCIStar trial. The company got a $14.3 million grant from CIRM to try their cells in SCI.

(Note: Asterias completed the SCIStart stem cell trial with a total of 25 patients; one third of whom were said to have gained two levels of motor function. The research and intellectual property were bought by Lineage Cell Therapeutics, which says it wants to continue human trials but has nothing lined up.)

Despite a lot of cheerleading from CIRM about this experiment being a therapy, there’s no way to know for sure if the stem cells helped either guy. Compared to baseline data for their levels and types of injury, however, both got better than would have been expected.

Boesen is featured on the CA for Cures home page weightlifting.

Says Jake about voting for Prop. 14: “Put yourself in the situation of someone who has a loved one or you yourself might need these stem cells. Being able to save a life like that, I think it’s so worth it.”