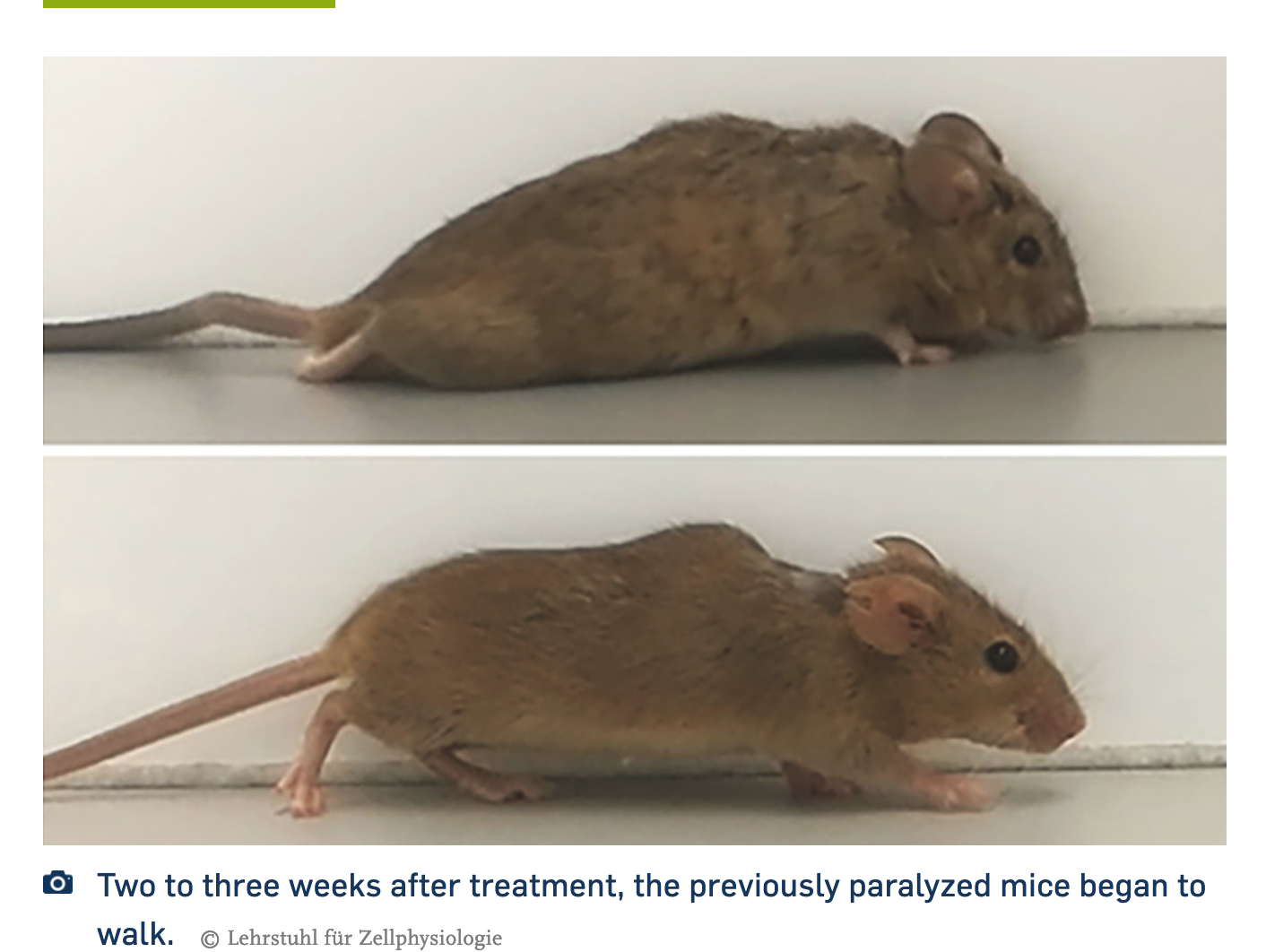 Maybe you saw this spinal cord research news, it has gotten a lot of media traction in the past week, partly because there was before and after video of treated animals, and yep, they got better.

Is this headline backed by any different news than all the other “mice got better” stories you’ve seen in the past 50 years? Breakthrough? Too soon to know. Groundbreaking? Ditto. Let’s say it deserves attention.

Here’s the gist: This study works by using clever neurochemistry to reprogram the intrinsic ability of spinal nerve cells to grow as they did when our bodies were first formed. Using what they call a “designer” protein and a genetic trick to deliver it to targeted spinal cord nerve cells, a group from Ruhr University in Bochum, Germany repaired damaged nerves, enough so to promote significant leg recovery in test animals.

Let’s unwind this a bit and see what’s going on.

Dietmar Fischer, PhD, Professor and Chair, Department for Cell Physiology at Ruhr reported his team’s results in Nature Communications, a top-tier journal. Here is a link to the full paper.

The protein used to promote recovery is called hyper-interleukin-6, which seems to stimulate nerve cells to regenerate. To be technical, it’s an artificial cytokine; these are switching molecules necessary for the multitude of processes needed to restart axon growth. There are of course natural cytokines in the brain and spinal cord, but the designer version works much better than native ones -- it hooks up with an abundance of receptors found on almost all neurons.

Here’s a section lifted from a Ruhr press release:

"This is a so-called designer cytokine, which means it doesn't occur like this in nature and has to be produced using genetic engineering," explains Fischer. His research group already demonstrated in a previous study that hIL-6 can efficiently stimulate the regeneration of nerve cells in the visual system.

The study focused on motonuerons, long nerve fibers such as the corticospinal tract that descend from the brain down the spinal cord and control major activities such as walking. The researchers used an inert virus to ferry the genetic blueprint for the hI-6 protein to the target cells; they noticed that their protein also found its way to affect some nerve fiber side-paths in the brain that are also important for movement but hard to reach otherwise.

"Thus, gene therapy treatment of only a few nerve cells stimulated the axonal regeneration of various nerve cells in the brain and several motor tracts in the spinal cord simultaneously," says Fischer. "Ultimately, this enabled the previously paralyzed animals that received this treatment to start walking after two to three weeks. This came as a great surprise to us at the beginning, as it had never been shown to be possible before after full paraplegia."

According to the published results, the scientists studied some mice that had been mutated to delete (or flox, as the paper states it) a molecule called PTEN. PTEN acts as a sort of brake on nerve growth; getting rid of it, therefore, frees up robust spinal cord nerve growth. Their floxed animals showed some regeneration even without the added cytokine, but no motor recovery. Adding the hIL-6 cytokine was much better, with regeneration of the crucial corticospinal cord and recovery of motor function in both hind legs, even though the drug was only given on one side of the brain cortex.

The German team suggests the regenerative effect of their novel cytokine might be improved if combined with other therapies.

. . .  our finding that the transneuronal application of hIL-6 enables functional recovery opens possibilities to further improve the functional outcome by combining it with other strategies, such as neutralizing extracellular inhibitors at the lesion site, or bridging the lesion site with permissive grafts. Such combinatorial approaches, also in less severe injury models, may maximize axon regeneration and functional recovery after spinal cord injury, potentially also in humans.

“Potentially also in humans.” That’s down the road a bit. It’s innovative work, shows a very cool mechanism of action, and we can imagine the upside as they move it forward. From the paper, with a nod to a chronic model:

The research team is now investigating to what extent this or similar approaches can be combined with other measures to optimize the administration of hyper-Interleukin-6 further and achieve additional functional improvements. They are also exploring whether hyper-interleukin-6 still has positive effects in mice, even if the injury occurred several weeks previously. "This aspect would be particularly relevant for application in humans," says Fischer. "We are now breaking new scientific ground. These further experiments will show, among other things, whether it will be possible to transfer these new approaches to humans in the future."

Let’s see more. A bigger animal model is necessary – we have all seen mischiefs of injured mice that got better using therapies that never panned out in humans. Also, while a spinal cord crush is severe, and important to this study, it’s not clearly relevant to the more typical contusion injury most people with SCI have. Lastly, the only question the SCI community really cares about is, will it work in the chronic stage of spinal cord injury? The scientists speculate that it could, so we will keep an eye on this lab and this line of work.

Have you read a recent news article about a "breakthrough" in spinal cord injury research, but are left with questions or doubts about what it means and when its impact could be felt? Email it to us at unite@u2fp.org.