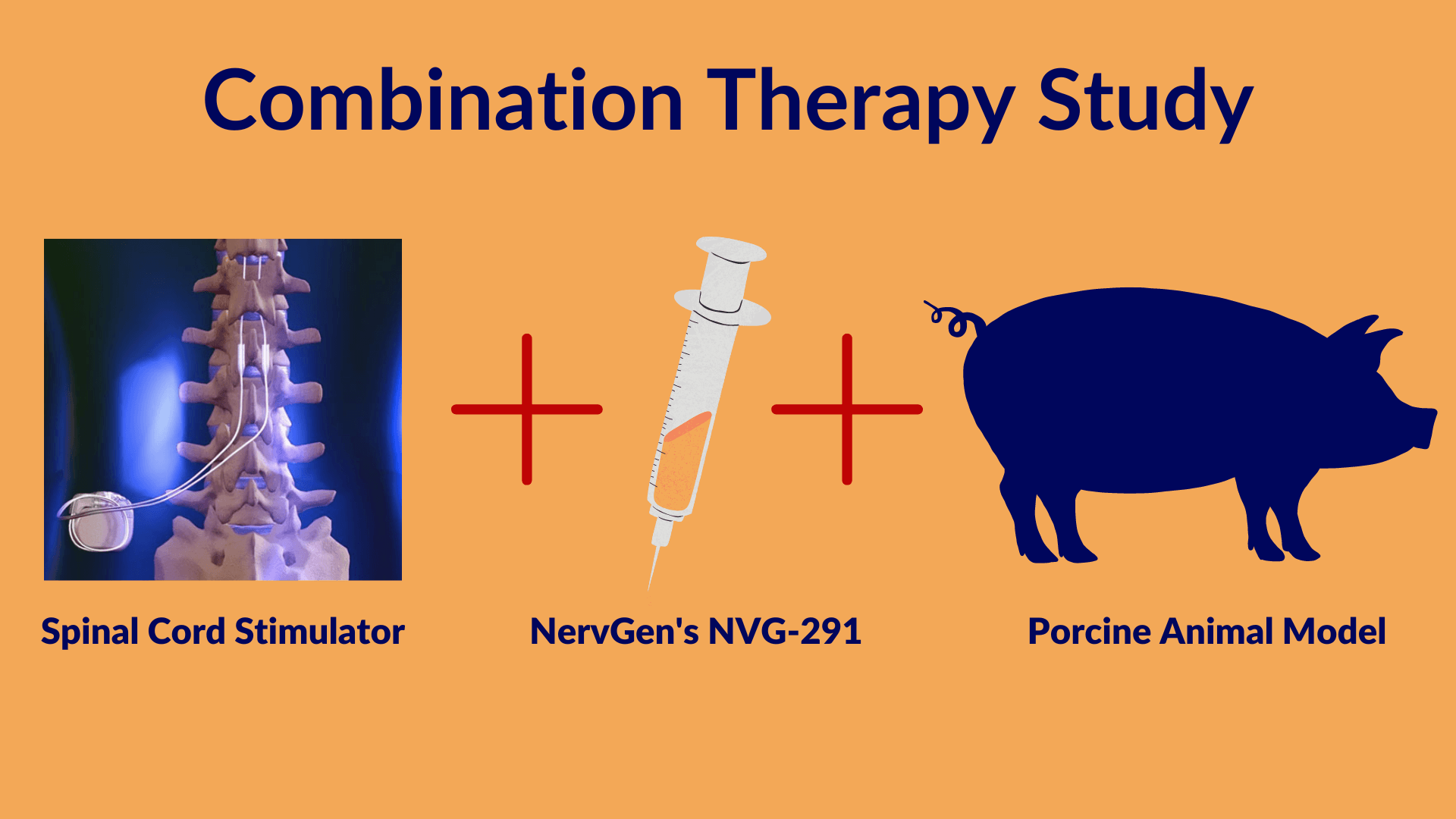 Unite 2 Fight Paralysis isn’t in the business of directly funding spinal cord injury research. If we were, our story would be easier to tell – donors are familiar with the usual disease-cure charity appeal. Instead, we utilize the tools of education and advocacy and the subtleties of systems theory to build alliances, explain how all the moving pieces interact, and share a vision of a much more efficient and effective treatment strategy. This keeps us behind the scenes.

In our most recent collaborative endeavor, though, we did find the money for a cool study, one we helped design. This is a perfect example of U2FP working off-stage, and seizing opportunity: We created a unique multidisciplinary research study combining a nerve growth drug and epidural stimulation in a large animal model targeting chronic spinal cord injury.

U2FP brought together collaborators from the University of Minnesota, Case Western Reserve University and Emory University, and the biotech startup NervGen.

The project begins in early 2023. From an October 25 U2FP press release:

“Epidural spinal cord stimulation is being studied in many places now and has shown efficacy in SCI human studies in restoring volitional movement and beneficial changes of various autonomic functions, short and long term.

“The drug NVG-291 has been shown to restore function and improve nerve regeneration, both acutely and in long-term SCI. Our research team suggests that combining NVG-291 with Estim could yield an even greater restoration of function.”

The peptide was developed by scientist Jerry Silver at Case Western. Said Silver, “Our studies have shown that this small peptide releases axons that are trapped within the inhibitory scar environment in the injured cord. This presents a potential new avenue of non-invasive treatment for SCI, promoting regeneration and functional recovery.”

The Estim part of the study is directed by neurosurgeon-scientist Ann Parr from the University of Minnesota. She has been a principal investigator in the large E-STAND clinical trial that has implanted Estim devices in about 25 spinal cord injured patients.

Floyd’s lab specializes in using pigs to test therapies. Pigs, about the size and weight of humans, offer many advantages over rats and mice when translating a result to clinical use.

Matthew Rodreick, Executive Director for U2FP, came up with the combo/collab idea. “We all want human clinical trials for people living with spinal cord injury,” Rodreick said, “and these are beginning to occur. But it is not likely these trials will deliver the kind of restored function our community wants and needs. Combination therapies become necessary. And in this case, both these therapies are already being tested in humans. Why not combine them?”

Rodreick was aware of Silver’s peptide; his most recent research had been presented at U2FP’s Annual Science and Advocacy Symposium in 2019. “It occurred to me that if the peptide worked, we might be able to drive it with some sort of combination therapy. So, I called Jerry and asked him, ‘have you ever considered combining your peptide with neuromodulation?’ He laughed and said that he had been dreaming about using spinal cord stim to enhance the peptide.”

So in early 2021 Rodreick contacted Floyd, who had weeks before presented her work at our 2020 Symposium. She’s always a willing collaborator. Rodreick reached out to Parr. Silver contacted NervGen. “To my surprise, everyone was excited to do this,” said Rodreick.

Floyd took the lead to submit a $1.5 million grant for funding to the Department of Defense Spinal Cord Injury Research Program (SCIRP). That proposal was well-scored by reviewers, but not funded – perhaps because Floyd already had a SCIRP grant.

Earlier this year, Rodreick suggested that the investigator team consider community-based funding at about $400,000; this would allow them to gather preliminary stim/peptide data that could perhaps lead to more substantial federal money later.

U2FP contacted several SCI funding groups and described the project. The pitch: This study would apply a combination of interventions already being tested in humans, carried out by the same people testing the therapies in humans. It likely won’t happen within typical funding programs, and it’s a bit bigger than any one of the smaller groups could handle alone.

Traci Fernandez, a U2FP board member, runs the United Paralysis Foundation. She immediately pledged $100,000. After getting more detail from Floyd, the other groups joined, together pledging about $300,000. “I liked this project because it starts in the community, is funded by the community, and involves collaboration of academia and industry,” said Fernandez.

Floyd has already lined up the pigs (six adult male Yucatan minipigs), NervGen has the drug, Parr has the stimulators and will travel to Emory when the time is right. We’ll share details as they become available.

U2FP’s Cure Advocacy Network (CAN) is another good example of U2FP working backstage. Over the past seven or eight years, CAN has created a sustainable stream of funding – $26 million for SCI science in four states (going on five). CAN arm-twists state lawmakers, shepherds legislation and engages local community support, holding everyone’s feet to the fire. It’s a slog, but it works. And now, after almost two years in the trenches, Wisconsin may come aboard. Here’s a recent post from CAN co-manager Jake Beckstrom on how that’s going.

Another behind the scenes program at U2FP is Lab Rats. Click the link to learn more about how this works – and how you as a person with lived SCI experience can become embedded in a research lab. It’s good for the community, and it’s important for the science.

Encouraging the evolution of spinal cord stimulation is another example of nimble, progressive thinking. Much activity in the field can be dotted-lined back to U2FP, including the quickening of e-stem clinical application. See this recent post for more.

Your support is essential. We do indeed depend on the generosity of the SCI community. Please help us educate, advocate and innovate toward treatments for spinal cord injury. Donate here.

PS - You can make a year-end gift and/or become a monthly donor by going to www.u2fp.org/2022gift. Thank you!