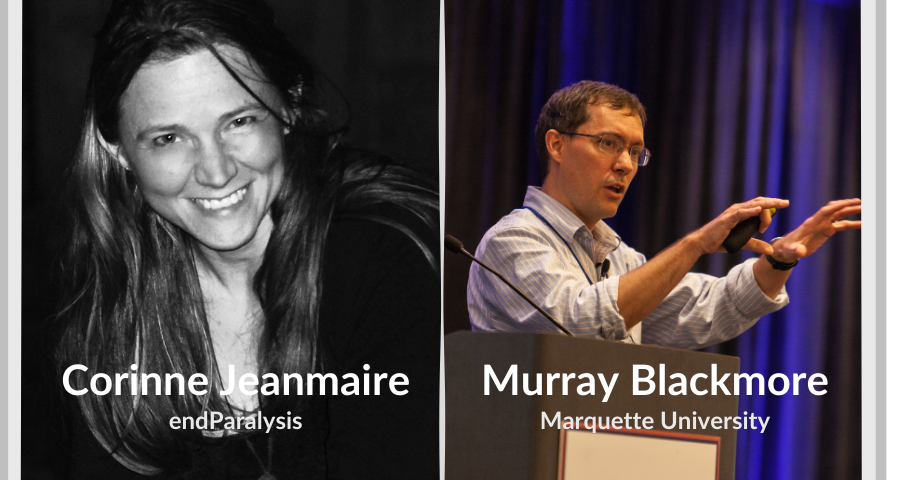 Spinal cord nerves don’t grow in adults, but once upon a time, when we were embryos, these cells grew like crazy. What happened to their growth motor, could we find it and turn cell growth back on, especially after injury?

In the lab, yes, it is possible to reboot growth programming by switching out the genes in the cells. Could it work in people? Maybe. First, here’s an experiment to try it in animals. Dr. Murray Blackmore’s lab at Marquette University was recently funded to advance a promising new gene therapy approach for improving axon growth after spinal injury.

This bit of research is extra cool because a) it uses an innovative genetic approach to restore function, and b) because its launch was certified by the U2FP Science Advisory Board (SAB).

The funder is the endParalysis Foundation, a small charity based in the Netherlands, managed by Corinne Jeanmaire. If you follow cure research, you probably know Corinne. Motivated by her own paralysis, she’s a relentless warrior for chronic spinal cord injury therapy development. She’s never shy about her frustration with the plodding progress of science and medicine. Corinne has been a familiar participant at numerous U2FP Working 2 Walk (W2W) Symposia over the years (indeed, she is a presenter at this year’s virtual W2W).

endParalysis doesn’t raise a ton of money, so to make sure she funds the most promising projects, Corinne takes advantage of the SAB’s expert review services.

Here’s how the gene therapy project was born. Corinne is well-schooled in SCI science and stays in touch with the handful of researchers who study chronic SCI with an eye on clinical relevance. Not long ago she sent out a note to several labs asking if they had any current or future projects that might fit with her mission. One went out to Dr. Blackmore. He studies the genes that provide the operating system for spinal cord regeneration. He has presented his work several times at W2W, including these presentations from 2012 (Rebooting the Growth Machinery) and 2017 (Combined Gene Therapy and Stem Cell Transplantation for SCI).

(Note: if you follow cure research you really need to follow Dr. Blackmore, one of the true believers in restoring spinal cord function. Start with this edition of U2FP’s CureCast, it’s brilliant.)

Says Corinne: “I doubted Dr. Blackmore would need money since he's had some very significant grants from NIH and other sources and what we can give is a drop in an ocean. But I checked anyhow, and indeed he had a small but really cool project that falls outside his current funding schemes because it is a combination therapy trial. So, the timing was great!”

This gene combo, called KN, worked consistently well in an earlier large-scale experiment but those animals had their spinal cord axons snipped in the brainstem (pyramidotomy), which of course is not what happens in real world SCI. The new study enlists an independent partner, the Steve Perlmutter lab at the University of Washington, to handle the animal surgeries after Blackmore’s team has applied gene therapy; KN will be delivered either directly to the spinal cord nerve cells, by way of a retrograde viral vector (KN is transported by a neutralized virus to cortical spinal tract (CST) axons connected to nerve cell bodies in the brain), or not at all (the control animals). Perlmutter, who won’t know what animal got what, will then perform cervical contusions to affect motor control on one side of each animal’s body.

Blackmore, from his proposal: “The contusion will be centered at the border of the C4-C5 spinal segments on the animal’s dominant forelimb side as determined by pre-injury testing. This injury model is chosen because it damages the corticospinal tract, which is critical for control of voluntary movements in primates, in similar fashion to traumatic SCI in humans. This injury results in a flexor bias in the ipsilesional forelimb, including difficulty extending the elbow, wrist, and digits, and weak grip strength, symptoms experienced by many people with cervical SCI.”

The treated animals will get behavioral tests of forelimb function and their spinal cord cells will later be examined to determine whether KN treatment promoted axon growth or improved forelimb function.

Blackmore: “Regarding behavioral outcomes, we hypothesize that enhanced axon growth would be accompanied by improved forelimb function, quantified as elevated reaching and grasping metrics, forelimb strength, and locomotor coordination and stepping accuracy. Given the known involvement of the CST in these functions, it is possible that cortical expression of KN may be sufficient to improve forelimb function.”

What they think is that the gene combo, carefully chosen by sophisticated bioinformatic screening, will reprogram adult spinal cord nerve cells to behave as they did in their embryonic state – that is, to grow and to sprout. An important question being asked is, will the gene therapy work for older injuries? Blackmore thinks it will but that is a key question in the current proposal.

This collaboration is cool because it sets up Perlmutter’s group to enhance spinal cord nerve growth in a subsequent phase. One of Perlmutter’s specialties is delivering electrical stimulation to injured animals to improve behavioral performance. Says Blackmore, “This complementary expertise is what motivated us to originally communicate. Once KN has stimulated new sprouting and connections, electrical stimulation might maximize their output and yield even larger gains in function.”

Corinne forwarded the proposal to U2FP’s SAB to validate its scientific merit. Three distinguished reviewers pored over the details and all agreed that it was based on a solid scientific foundation, worth doing and that the funding was reasonable. The SAB reviewers offered feedback and study design advice (e.g. the injury model might be more relevant to humans if damage came from a bilateral cervical contusion or even a unilateral hemisection).

The Blackmore lab is already busy with the new study, hoping spinal cord cells can be switched on to grow just as forcefully as during development. And if it doesn’t work? Blackmore, from the proposal:

“It is of course possible that KN will produce neither CST axon growth nor behavioral improvement. From a scientific perspective, however, failed KN growth in the new system would be an interesting puzzle that we are well positioned to pursue.

“It is possible that KN will promote CST sprouting, but behavioral gains that are modest or missing altogether. Axon growth is certainly no guarantee of behavioral benefit. This would imply that the new growth may be mistargeted or otherwise suboptimal. This possibility is precisely the reason for the partnership with Dr. Perlmutter in this pilot work, as the Perlmutter lab is ideally positioned to proceed with electrical stimulation of KN-treated animals.”